No, not fed across the table and the blade - although that has occurred to me - but on the topic of the Saw Stop and Fed.gov mandates that all saws must have this technology.  Warnings for crude, juvenile humor, imagery and speech (it is Colbert, after all).  Also note the very peculiar attitude Colbert takes and the strange perspective on the question.


The woodworking tool industry is in crisis right now.  A few months ago, a lawsuit was won against Ryobi tools' parent company, for producing a "defective" table saw.  The plaintiff was awarded $1.5 million when he sued for $250,000.  The defect?  It did not include an expensive safety option that was invented around year 2000; (the modern tilt-arbor table saw was invented in 1939; the basic idea goes back to 1813).  In 2000, an inventor produced a technology called a Saw Stop that senses when flesh touches the blade and stops the blade in milliseconds.  In the process of stopping the saw as fast as it does, it destroys the saw blade, and possibly other parts of the saw.  The user still gets cut, but typically will require stitches instead of having a body part cut off.  He shopped this invention to the major tool makers and none of them agreed to license his invention.  Their major concern was that the idea was untested; they had no idea how durable it would be (contractors' tools live a rough life); they had no idea if it could be added to existing products (were they rugged enough to survive the abrupt energy dump that destroys the blade?), or how to roll it out across their product lines.  The inventor started his own company, and sells table saws with this feature.

This suit will end the production of low-priced and bench top table saws, seriously impacting hobbyist woodworkers as well as the tool industry.  Professionals will buy the more expensive saws and raise their prices to you and me.

For the record, I have a table saw in my garage, and it's an old Ryobi without any such safety mechanisms.  I have all 10 fingers still intact and couldn't tell you how many thousands of feet of wood I've cut on it.  (On particularly bad days, I have considered using it to cut off the end of an arthritic finger, figuring it's a few hours with very intense pain instead of years of annoying low level pain, but that's another story for another day).  The inventor and owner of Saw Stop says table saws send 40,000 people per year to emergency rooms, and 4000 partial amputations (the rest presumably from kickback - all saws have anti-kickback devices on them, that are routinely defeated by their owners).  By rough WAG, there must be millions of uses of a table saw in a year in the US. 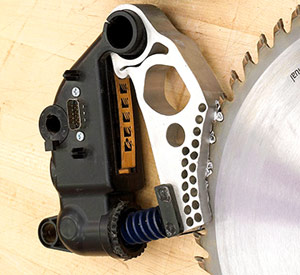 (the Saw Stop mechanism)
The question here isn't "the right to cut my finger off" as Colbert puts it, the question is whether the government should force this onto the market and cut off (pun intended) hobbyist-priced saws.  For a quick check, note the prices on Amazon (they're convenient) for a Saw Stop saw vs. the competition.  You can get into a good beginner's table saw for about a quarter of the price of a Saw Stop saw.  You would expect that a beginner would be more likely to hurt themselves on a saw than a professional (which isn't necessarily right), so that they would want to pay for the protection, but should that be their choice?  Likewise, a cabinet shop might decide that a few thousand spent on Saw Stop saws might head off hundreds of thousands in liability from a few moments of inattention - and their insurance companies might not even allow them to buy any saw but the ones with Saw Stop technology.  As you expect (well, I do) other designers have hopped into the fray and are offering technology to compete with Saw Stop.

Is the Saw Stop a good idea?  Heck no, it's a great idea.  But I think the Whirlwind that stops the saw without contact from your fingers is an even better idea.  If it would be possible to stop the blade without destroying it, destroying the Saw Stop and maybe the saw itself, it would be even better.  The point is, it shouldn't be someone else's decision, it should be the buyer's.

Posted by SiGraybeard at 4:29 PM