Today, Ann Barnhardt linked to an excellent video by Karl Denninger (link to the video on YouTube) and another frequent stop on my visits along the inter-toobs, Bayou Renaissance Man had an excellent summary of much of the economic situation which is well complemented by that video.

My new header specifically talks about living after the collapse - which obviously means I'm certain a collapse of some kind is coming.  BRM quotes analyst John Mauldin who believes "the government will rein in spending, either rapidly or over time, but in such a way that it begins to reduce the debt. This will mean years, perhaps decades, of real economic pain, but will restore the budget and the public purse to a healthier state."

I wish I could be that optimistic about it.  Look around - do you see any statesman-like leaders who will be willing to be unpopular, one-term leaders to get us out of trouble?  Do you see any evidence we can get compromise?  Look no farther than last fall's "super committee".  Here's a group tasked with cutting an absolutely trivial amount - 3% - out of our spending and they couldn't do it.  They were tasked with cutting 1.2 Trillion dollars over 10 years: that's 120 billion in this year if you just divide by 10 (and I bet they don't: I bet it was stacked toward the end of that 10 years).  Our revenue is about 2.2 Trillion so it's 5.5% of the revenue; but less than 3% of spending!  Most people could handle a 3% cut in their spending if they had to, by tightening their belts enough, and they probably have in the last year.  The fed.gov probably looses that much without even noticing it, like a toddler dribbling turds out of Pampers.

The fact is, we need to cut more like that $1.2 trillion this year, not over 10 years, and even that won't balance the budget.  The recently submitted Obama budget - which will never see the light of day because Harry Reid in the senate refuses to pass a budget - had a $1.33T deficit this year.  We need to run surpluses as far as the eye can see to pay off our deficit.  We need a government that is structurally fundamentally different.

The fact is, we may not have 10 years; I don't believe we have more than a couple.  As was pointed out earlier this week, our per capita debt is 114% of Greece's as well as that of all of the PIIGS.  BRM's post shows a chart from Zerohedge showing the Chinese have been getting out of US debt since last summer, but really slowed their buying in the last quarter.  I've pointed out many times before that China is using their mountains of dollars to buy mines, commodities, everything they think they need.  Russia has dropped their amount of US debt by 50% since October 2010.  In the last year, the buyer with the biggest increase in their buying of US debt has been the Federal Reserve Bank.  Simply put, we are writing checks to ourselves to deposit so that we can write bigger checks. 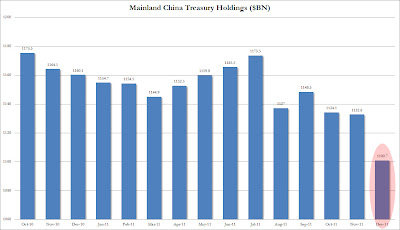 (source)
How can this go on?  How is this different from the old joke T-shirts that said, "what do you mean I'm broke - I still have checks?"  Or the belief that as long as our credit cards haven't been revoked we're still fine?  Now, it's possible that if we started acting like world leaders instead of pigs (note the missing "I"), and cut our budget by the $1T Ron Paul says he'd cut, these countries might decide that we're safe to invest in, and would be willing to buy bonds again.  Analogies to alcoholics or druggies swearing to be better if we'd give them "just one more chance" come to mind.

Earlier in the week, I heard an NPR program that, as always, confuses tax rates with tax revenues as if they're the same thing and raising rates automatically raises revenues.  Almost as a bonus, today on TownHall.com, the Political Calculations blog posted a cool analysis of Hauser's law and put it all on one nice graph. 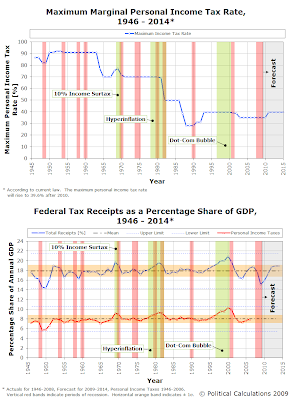 With a few short-lived exceptions, it's obviously true that tax revenues are essentially constant (as % of GDP), regardless of tax rates.  That can only mean that when taxes are higher, the GDP contracts.  The government doesn't collect any more money because there's less to take a portion of.  When taxes are lower, they take a smaller percentage of a bigger pie, giving the same percent of GDP as tax.  Empirically true based on measured data.  Given that, why would one choose higher rates over lower rates?  Higher rates are punishing, if not outright confiscatory, so if the Evil party really wants to jerk up rates on taxpayers (and they are doing it January 2013, unless it's revoked) it can only mean "I want to punish those rich people so badly, I'm willing to hurt myself to hurt them".  That's only makes sense if your aim is to grow government no matter how many people you hurt. Frankly, it's psychotic.

Hauser's Law presents a natural limit to the size of the Fed.gov hydra.  Maybe it would be 18% of GDP in the long run, but for the foreseeable future, spending should be limited to 15% of GDP, so that a surplus could start to work its magic.  Note that's bigger cuts than a balanced budget requires - and you know how even talking about not increasing payouts, let alone cutting them, causes the Free Sh*t Army to howl like they're being fed into a chipper/shredder.  Seen any pol with the guts to do that?

I don't hear a popular call for this sort of spending reduction.  The TEA parties did, for a while, but I think they've been cowed into not gathering and expressing their views anymore, letting the media's howling about how racist and terrible they are win the argument.  Seen any TEA party demonstrations lately?  For every one of us who says, "I always thought social security would not be there for me and I saved for my own retirement", I hear a larger number saying, "that's my money!  I paid that and you said it would be there!"  I hear some talk about it among stupid party voters, but the fact that Romney still appears to be in the catbird seat for the nomination tells me it's not serious, yet.

As a country, we don't seem to be willing to face our problems.  As I've said before, here's what I think is coming.


A marriage of convenience between zero-government anarchists and total-government socialists, [occupy] seems to go back to a talk by an SEIU vice-president last spring, but was not predicted.  Occupy got enough good will from the Evil party - and even some III patriots - that you can expect them back when the weather warms a little.  The potential I see is for them to act up so badly that the (bankrupt) cities can't handle the expenses.  Perhaps they assassinate a politician they don't like, or duplicate the Chicago 1968 DNC riots (they call for it here).  The (bankrupt) cities beg the (bankrupt) feds for help, and the National Guard is called up.  Martial law is enacted, giving the fascists the chance to surround the white house with tanks and address the (right wing) domestic terrorism problem.  This could make the last presidential election The Last Presidential Election.

A self-identified occupy protester is already writing publicly about shooting up Wall Street.  Goes with the above, doesn't it?  A recipe for blood in the streets and the collapse by next Fall?  I report, you decide.
Posted by SiGraybeard at 8:09 PM