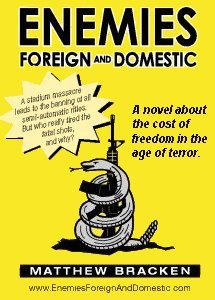 Just in case you haven't heard, I want to highlight Matt Bracken's plan to "Amazon-blitz" Enemies Foreign and Domestic. Let me quote from his "day one" post:


On next Thursday, March 1, Enemies Foreign And Domestic will be put into Amazon Kindle's free library.

Where EFAD's free download promotion will be different from those of the thousands of fantasy/romance/vampire novels currently offered on Kindle, is that I'm simultaneously coordinating a mass plan to ensure that Operation EFAD goes hyper-viral on all constitutionally-oriented, freedom-loving, and Second Amendment websites and blogs at the same time.

Or on at least on as many as I can reach, and that is where you come in. There are literally hundreds of patriotic websites and blogs, and I can only reach a few. You can reach them all, every last one. And then some. More about this in the next communiqué on D Minus Six.

The purpose is to try and make EFAD the #1 book on Amazon, or at least to attract media attention to this "dangerous" book:


The idea is to force open a long overdue national conversation that the elite MSM very much wants to ignore. In large strokes, it is about our federal government morphing into a socialist tyranny before our eyes, a tyranny that is no longer soft, but getting harder with every passing month. Which is it to be: freedom, or tyranny?

with the point of all this being:


In 2012, the fictional premise of Enemies Foreign And Domestic, that a small clique of senior BATFE officials might conspire to arrange a mass shooting into a packed football stadium (also with the intention of discrediting our Right to Keep and Bear Arms), suddenly seems much less far-fetched.

So here's the plan: on Thursday, March 1, we will engineer a stratospheric spike in the number of free Kindle downloads of Enemies Foreign And Domestic, and continue this operation for up to five days, the max allowable under the terms of the free download program. Then we will sit back and watch the bewildered and alarmed MSM explore this sudden and frightening phenomenon erupting among the unwashed gun nuts and wild-eyed Constitution fanatics. You know, us. Real Americans, out here in fly-over country.

And when they predictably condemn EFAD for its fictional assassinations of government officials, and the rest of the story that they will pretend to find so abhorrent, we will shine their own spotlight right back on them, and yell Fast And Furious in their faces!

"Really? Enemies Foreign And Domestic is a terrorist manual? Well, I'll see your fictional stadium massacre, and raise you a real-world conspiracy to murder hundreds of Mexicans for political purposes. If you would ever cover the story, instead of covering it up!"

I haven't read this book simply because I don't read much fiction, but I will be getting the Kindle version next Thursday without a doubt.  Be there, or be trapezoidal.