The New York Times did a report this Monday "The Way Greeks Live Now", a profile of life in Greece today.  Written by Russell Shorto of the John Adams Institute (unexpectedly, in the Netherlands), it paints some striking images:


By many indicators, Greece is devolving into something unprecedented in modern Western experience. A quarter of all Greek companies have gone out of business since 2009, and half of all small businesses in the country say they are unable to meet payroll. The suicide rate increased by 40 percent in the first half of 2011. A barter economy has sprung up, as people try to work around a broken financial system. Nearly half the population under 25 is unemployed. Last September, organizers of a government-sponsored seminar on emigrating to Australia, an event that drew 42 people a year earlier, were overwhelmed when 12,000 people signed up. Greek bankers told me that people had taken about one-third of their money out of their accounts; many, it seems, were keeping what savings they had under their beds or buried in their backyards. One banker, part of whose job these days is persuading people to keep their money in the bank, said to me, “Who would trust a Greek bank?”
.....
Yet spending time in Greece presents a complicated picture of what is going on. There is certainly anger and belt-tightening and dark clouds of depression. It’s not uncommon to see decently dressed Greeks discreetly rummaging through garbage bins for food. A new book about how the country survived the Nazi occupation — “Starvation Recipes” — has become a surprise hit. But there are also success stories that fly fully in the face of the turmoil. Most surprising, there is a pervasive sense of relief over the crisis that is upon them, as if a long, strange dream is at last over. [emphasis added - GB]

While there might be debate among observers about how long it takes us to reach a Greek-style collapse, virtually everyone agrees we are headed there, and the President's latest budget proposal does nothing to head it off.  The Greeks have a higher percentage debt to GDP than we do, but we have many times their debt. In absolute terms, we are the brokest nation in the history of the world. Which leads to this:


Anastasia Tsangarli, a family friend who showed up to take part in our discussion, agreed that cuts were necessary, saying, “The Greek way of life is to spend and then overspend.” She and her husband are also from Giannitsa but lived for a long time in Jersey City, where she worked in a factory making fake fur coats. When the factory closed, they moved back, only to find life far more difficult than it used to be. Her husband, an electrician, is out of work. She does some baby-sitting. “We are afraid of the future, so we don’t spend anything without having a good reason,” she said. But the couple have an escape plan. They became American citizens while living in the United States. Her husband is 60. When he is 62, they can return so he can claim Social Security benefits. [emphasis added - GB]

I'm sure moving from one bankrupt country to another is going to work out well for them.  One more reason why even folks in their fifties will never live on social security.

The Times article is long and meandering, but it ends with more of  a feeling of optimism than you might think.  The hope that Greek families and communities are getting them through this.  Think resilient communities. Think the well-worn idea of tribes.  If you go to a church, are you in a small group or home group?  Do you have a network of friends - preferably with skills? 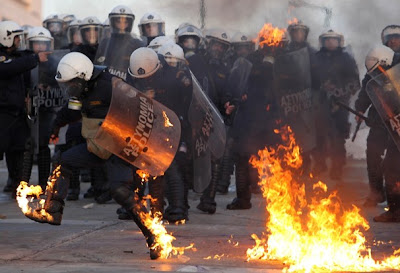