The Coming Revolution in Micro Production

H/T to Arctic Patriot in an email to me, pointing out this article on MIT's Technology Review e-zine: Why 3-D Printing Will Go the Way of Virtual Reality.   The author has one good point:


But the notion that 3-D printing will on any reasonable time scale become a "mature" technology that can reproduce all the goods on which we rely is to engage in a complete denial of the complexities of modern manufacturing, and, more to the point, the challenges of working with matter.

A columnist on Tech Review does a good job of arguing against this viewpoint using regular printing as a model.  In my view, it simply comes across as this year's version of the famous quote (attributed to IBM's president Thomas Watson), "The world will never need more than four or five computers".   It's simply too myopic.

Stop for a second.  Look around you.  Everything you see that didn't grow out of the ground was made by someone.  In the case of your computer, the molds have to be made to cast the plastic, which has to be made from chemical feed stocks.  Metals have to be mined, refined, cast, and machined.  The first articles of anything made of metal are made by the most advanced machinists, called tool and die makers.  The next are manufactured on a model created by these folks.  You don't have to look too far to see various things sold as better because they are "CNC Machined", but CNC (Computer Numerical Control of machining) doesn't assure anything other than lower amounts of scrap for the company that makes them and possibly a more consistent product

Machining is a subtractive process.  You start with either a casting, which is shaped to minimize the machining operations, or from "billet"; metal plate, bars and sheets produced in standard sizes.   Either way, you then "remove everything that doesn't look like" what you're trying to make: you subtract it from your starting piece.  It's not unusual to remove more metal than remains in the part you created.  In comparison 3D printing is an additive process.  The two processes compliment each other, and there are things that can be made in the additive 3D printing process that can not be made by subtractive processes.

The first machines were called stereolithography, and made parts by shining a laser on fluid that polymerized into a plastic where the laser hit.  A few thousandths of an inch below the top of the fluid was a platform that the plastic was formed on.  The platform is lowered and layer by layer the object is created.  The result was usually a thin, translucent, plastic shell model of your object. 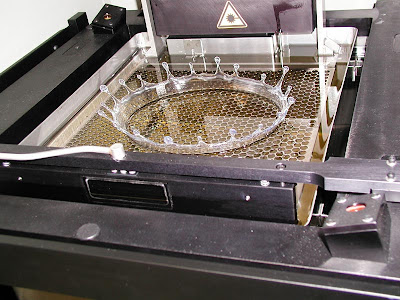 from the 3D guys, a whimsical creation: a "frozen" splash on the table of an SLA machine.

More recent 3D Printing has become a dry process, or a drier process, as the current machines deposit layers of plastics that are fused together, or extrude thin streams of plastic.  The big issue that has to be resolved for 3D printing to have an enormous impact is the materials they use, and progress is being made.  Scientists have 3D printed implantable veins - almost two years ago.  MIT has printed solar cells.  Don't think that what comes out of the printer has to be the final item.  For example, almost all mass produced jewelry and hundreds of precise ("jewel-like") mechanical items are made by lost-wax casting, where a wax mold is carved or molded, and then used as a master to cast a piece.  The models that come off the 3D printer can be used in place of the wax and cast.  There are service bureaus that will take your computer file of a 3D model of a piece of jewelry, 3D print a mold, and return a cast and polished piece of jewelry to you.  The same lost wax casting technology is used by dentists and in many other places; these will also likely go to 3D printing.

Right now, with a hobbyist-level 3D printer, you could print things like plastic plates, forks, cups, and other pieces of the "cheap plastic consumer stuff" we buy in bulk (I have no idea how cost-effective that is, ignoring the cost of the printer).  Industrial grade printers have been extremely widely adopted in manufacturing.  As resolution and materials improve, the 3D printer will be more able to print things that the owner can assemble into an item they'll use around the house. 3D printing is already a billion dollar industry, and there's no reason to think it's going to fade and go away.