Another Turd Buried in Obamacare

... and they're not even done sifting the legislative kitty litter for buried nuggets.

The law requires your home be "inspected" to ensure compliance with the Glorious Motherland's diktat.


The Health and Human Services’ website states that your family will be targeted if you fall under the “high-risk” categories below:


The Obamanoids have apparently tried to say, "but this is only for those in the Medicaid system" - and conveniently overlook the fact that the black letter law says nothing of the sort.  Just as SWAT teams started for armed hostage standoffs and are now used for trivial, low risk things like seizing "illicit" blackberry bushes from some hippie organic gardeners, systems like this always expand in the direction of destroying liberty.


“This is not a “voluntary” program. The eligible entity receiving the grant for performing the home visits is to identify the individuals to be visited and intervene so as to meet the improvement benchmarks. A homeschooling family, for instance, may be subject to “intervention” in “school readiness” and “social-emotional developmental indicators.” A farm family may be subject to “intervention” in order to “prevent child injuries.” The sky is the limit.

Although the Obama administration would claim the provision applies only to Medicaid families, the new statute, by its own definition, has no such limitation. Intervention may be with any family for any reason. It may also result in the child or children being required to go to certain schools or taking certain medications and vaccines and even having more limited – or no – interaction with parents. The federal government will now set the standards for raising children and will enforce them by home visits.”

It's short.  RTWT.   Obamacare mandates I recommend you take blood pressure pills before you go. 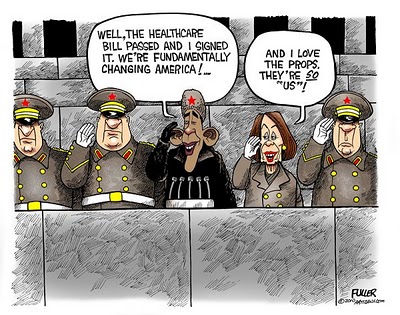