In case you haven't seen it, props to the guys at Lucky Gunner for not taking themselves or their subject too seriously, and putting up a funny video about Blackhawk! tactical goggles.  Style points awarded.  No financial ties, yada yada.

Initial results from the War of the Ants are good.  We had this Terro stuff recommended to us, and it's impressive.  It's a liquid bait, and a drop fell on the door step.  A little while later, every degree of the drop's circumference had ants at it - it looked like one of those Serengeti water hole scenes.  We also found the same ingredient in the Talstar PL I was looking for under the Ortho label, and the perimeter has been secured.  We've read that many of the people who put in pavers for a living will mix some of the Talstar granules in with the sand and brush it into the seams between pavers, to keep the ants from colonizing. 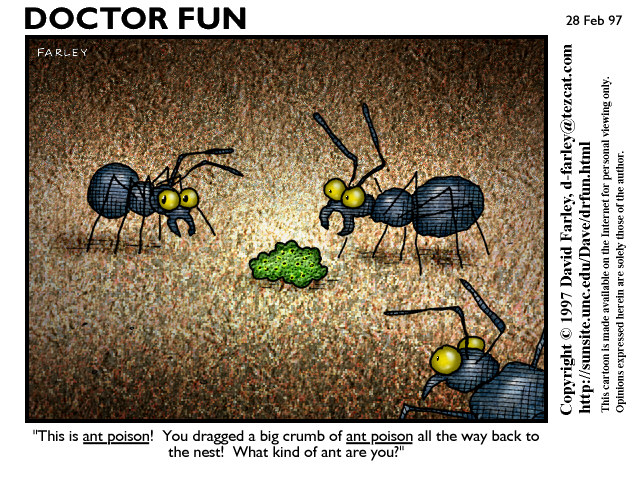 The rod rebuilding project is proceeding well, if slower than I'd like.  I removed the last of the old epoxy today, using a heat gun to soften it and a metal edge to scrape it off.  I put the handle and grips in place with epoxy paste.  Hmm... I guess I should put up a photo, but no time tonight.  Next update.  Next step is to smooth the blank with a little 400 or 600 grit paper, and a touch of wet sanding, then start putting guides on.

I also did the dirty deed of washing and waxing the cars.  My Explorer has the ability to change size spontaneously, shrinking for normal use, but expanding when it's time to go over every square inch with a waxy cloth.  I used to have a Cherokee that did the same thing.  People wouldn't believe me, but I swear I saw it.

Finally, if you haven't been to Borepatch to see someone's Lego version of "White and Nerdy" get on over there.  This is a Weird Al song, the Lego version is based on the original here, and among my favorites.