Sometimes The Writing On the Wall Is Really Easy to Read

Peter, Bayou Renaissance Man, writes an excellent piece on how the bond market is on the verge of becoming a really big problem, and in turn links to Denninger.  Denninger shows the plot that makes my blood run cold.  Let me show that first: 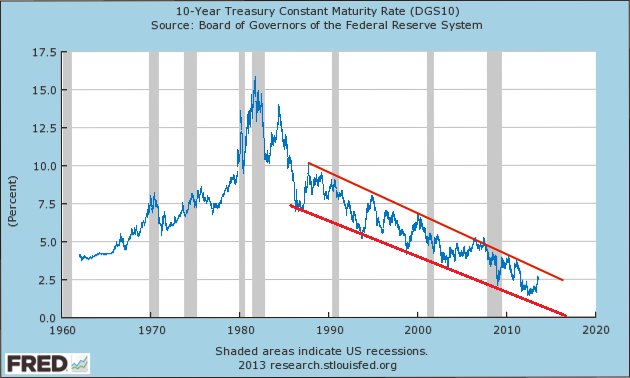 Let me rush to say I added the lower red line, the lower bound of the range the bonds have been in since 1985 - not KD and not the St. Louis Fed.

Now, what this graph shows is the interest rate of the 10 year bond since about 1962.  Recessions are the vertical gray bands.  The most important thing to notice is the general behavior. The 10 year bond yield peaked in 1981/82, right after the awful Nixon/Carter inflation of the 70s, and for 30 years has been in decline.  What's so easy to read about this is that it's obvious it can't stay in that channel much longer; in a few years, the rate has to go negative (you pay them interest, instead of earning it).  It has to either stop dropping and stay where it is (see any other long flat areas in there?); or go up, which is the more likely scenario.

For an excellent introduction to the importance of the bonds, BRM had an excellent piece last Sunday, with nice explanations of the terms always used on the news.  If you don't know what a Zero Coupon bond is, head over and read that.

Why is this information important now?  The reason rates have trended lower since the crash of '08 despite the incredible deficit spending is the monetary creation the Fed has been behind.  Quantitative Easing.  Creating money out of thin air to buy bonds.  Money from nothing.  The problem is that no one wants to buy bonds with interest rates that low when that same money from nothing is pumping up asset prices of almost every other class of asset.  Why settle for 2% when inflation is pushing 10% and stocks are hitting records regularly?  Since the sales of the bonds are the accounting method to finance our deficit, it's only the action of the fed, buying 90% of our bonds, that allows the spending to continue.  Bayou Renaissance Man writes:


Detroit has defaulted on its municipal bond obligations because its tax base has shrunk to the point that it can no longer collect enough in rates and fees to service its debt.  That's happening elsewhere in the country as well - for example, witness last month's bond default by a Florida bridge agency.  Note how many California cities have declared bankruptcy, or are seriously considering it.  The contagion is spreading fast.
...
The rise in interest rates that has already begun will inevitably drive down asset prices, as outlined above.  That means that the Fed's balance sheet may be seriously affected.  Right now it's carrying almost two trillion dollars' worth of Treasury bonds on its books as assets, listed at their face value.  If it has to 'mark them to market' - i.e. list them at what others will actually pay for them right now - the value of its assets will show a serious decline.  It'll become technically bankrupt, and be unable to sell its assets for sufficient funds to deal with any other financial crisis that comes along.  That means its only recourse will be to print yet more money - but it's already pumped over $3 trillion of hyperinflationary excess cash into our economy.  It can't use that tactic much longer without risking a Weimar Republic-type disaster. 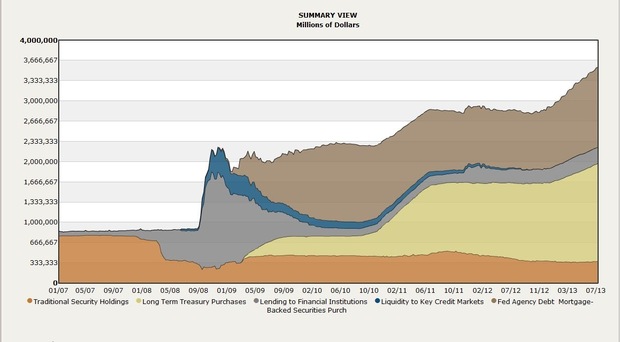 This is the Cleveland Federal Reserves summary view of assets held (bonds, etc.), since '07. Note how it was about $800 billion in '07 while today it's pushing $3.6 Trillion?  That means the Fed has more than quadrupled its assets.  As Tyler put it:


What will happen if, in order to forestall inflationary pressures, the Fed needs to reverse course and, over a short period of time, sell a meaningful part of the trillions in bonds it has bought? As Buffett intimates, it would be ugly: interest rates would spike, and this could pull the stock market down sharply. We had a hint of that kind of market decline already. In June, the Fed suggested that it would start to taper off new bond purchases within several months, which means buying less, not actually selling, and this led to a temporary dip in stock prices and a rise in interest rates.

How long can this go on?  Can we buy 100% of our own bonds - fund our deficit out of thin air?   Frankly, I'm surprised it's still going on.  At some point, the world is going to decide we're no better off than a Greece or other country with an extreme spending problem and they're going to shun dollars.  It's already going on: more and more countries are dealing in other currencies, or baskets of currencies.  The world is transitioning into its "post-US" configuration.  At some point, that speeds up and we collapse.  It might take a day or two.  Whether that's next week or in a few years, I can't tell you.