Admittedly part of having such a large number is because a Yen is such a small amount of currency, about equal in purchasing power to an American penny.  Still, divide a quadrillion by 100 as if you were converting pennies to dollars and you get about 10 Trillion.


This represents about $10.5 trillion, is an amount larger than the economies of Germany, France and the U.K. combined, and is about 230% of Japan's GDP although at this point who cares: Japan will never repay its debt and the best it can hope for is to inflate it away, which ties in with the first forecast of ever greater "easing" by the BOJ until fiat after fiat loses all meaning in a world that is so hopelessly in debt that destroying the very concept of modern money will ultimately be the only recourse.  {Note: the bold italics are my addition - SiG}

They're simply the leading edge, the farthest out there in the world - in terms of debt to GDP ratio.  But if you include all the unfunded liabilities and "off book" shenanigans built into our budget, we're looking at a total debt of about $140 Trillion.  Our total indebtedness is over 13 times what Japan's is.  And even that's not the complete picture.  The 9 largest banks in America alone are exposed to the loss on derivatives (essentially debt instruments) of over $220 Trillion. 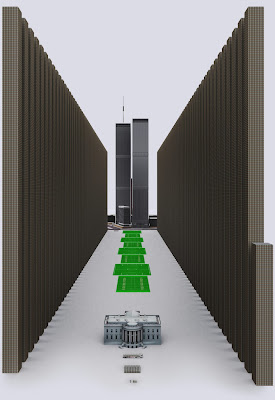 Demonocracy's visualization of 230 Trillion as $100 bills. Note the little man standing in front of everything - on the left. The little worm next to lastfootball field is a truck with $2 billion dollars.

There is no government in the world that has this kind of money. This is roughly 3 times the entire world economy. The unregulated market presents a massive financial risk. The corruption and immorality of the banks makes the situation worse.

Oh, yeah.  Things will just be peachy.  Nothing to worry about here.