The major market indices were down again today, continuing the losses from last week, and some indicators are just not looking good.  StockTiming.com posts in the daily free info this plot of the NYA - a composite of the NYSE. 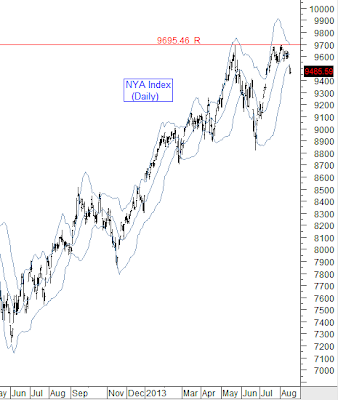 The story at a glance is the red line up top, the former high level attained on May 26th, just a few weeks ago.  It has been approaching that line and not been able to get higher despite being close a few times since May.  It closed even lower today, 9385.9.  That appears to be a sign that it has peaked and it's going to head lower rather than test its previous highs.  By the way, the last time the market was above that nominal level (that is, not corrected for inflation) was at the end of 2007 - well before the '08 crash.

As the commercials say: wait!  There's more!  ZeroHedge reports all major bond prices are up: the 10 year bond has hit a 25 month high, and:

As I've said here before, because most everyone says it, nothing will collapse the US faster than interest rates going up much higher.  This raises the interest on our debt, raising the percentage of GDP that we spend on debt service, and squeezing off every other target they want to spent money on.  A bit earlier in the day, when 10Y rates were 2.873, ZeroHedge wrote a piece with some "inside baseball"comments on the Fed and the departure of Bernanke.  Interesting reading.

Why would bond sales go down?  There are many reasons, not the least of which is that bond buyers realize that they might not be getting a fair yield for the inflation they see in the US; not enough yield for the risk they're taking.  Seeking Alpha reports buyers might be upset about the prospect of "tapering" by the Fed (turning off the printing press) - that could include thinking if the money pump gets shut off, bad things will follow and they surely won't get anything for their bonds.

As I poke my head out of my secret bunker of solitude, one hand lifting the manhole-like cover, an Uzi clenched tightly in the other, I have to say it looks riskier than usual out there.  Time for me to retreat back into the bunker, have some leftover pizza, and try to figure out ways to survive.