Is DHS Planning (for) a Race War? Or Is It Just an Employee?

The Blaze broke the story today about Ayo Kimathi, a small business specialist for the DHS by day and black supremacist by night who runs a website preparing blacks "for the inevitable war" against white people.  The website is called WarOnTheHorizon (dot com!), where he goes by the nom de guerre "Irritated Genie".


“The 21st century will either mark the return of Black resistance to white domination or global white-on-Black genocide leading to our complete extinction,” the website declares. “Warfare is eminent, and in order for Black people to survive the 21st century, we are going to have to kill a lot of whites – more than our christian hearts can possibly count.”

(Confidential to Mr. Kimathi: the word you want is imminent, not eminent - but maybe it's just old white cracker stuff to care about the meanings of words)

(Screenshot: waronthehorizon.com)
Perhaps the strangest aspect of this extremely strange story is that the Southern Preposterous Lie Center actually has him listed on their Hate Watch ("Keeping an Eye on the Radical Right") pages!  Why they conclude he has right wing politics is completely missing from the column.  I see nothing about him that I'd identify as clearly right or left, just clearly homicidal, but hard over leftists like they are will think anyone who hates is right wing by definition.

So doesn't the Fed.Gov, with their hands on the mighty info-suck of the NSA know that their ICE employee is running a hate-speech filled web page?  Apparently not - at least, not that they'd tell us.

“When I saw the website, I was stunned,” she said. “To see the hate, to know that he is a federal employee, it bothered me.”

In an email to TheBlaze Thursday, U.S. Immigration and Customs Enforcement deputy press secretary Gillian Christensen said she could not comment as a matter of policy on whether an investigation into Kimathi is underway.

Yet, by government policy, he had to get the website approved by his leadership so that they know it's not conflict of interest.  Whenever we deal with Fed.gov, it's reasonable to assume stupidity over malice, but does management know about this website just let it slide by?  Did he lie about the website and they fell for it?  If his job involved the massive ammo purchases DHS is charged with, or other military/police activity, that would be ominous.


Kimathi’s former supervisor said among his duties at DHS and ICE is speaking at various vendor events. He’s one of the agency’s public faces. It is his job to advocate for small business owners “white, black, historically disadvantaged, disabled veteran-owned, everybody,” the supervisor said.

“He fights for the little guy,” the supervisor said. “And he’s very good at it. He has a commanding presence. He’s very suave. It’s almost as if he has a split personality.”

As of a few moments ago, the DHS Office of Acquisition listed him on a public web page: 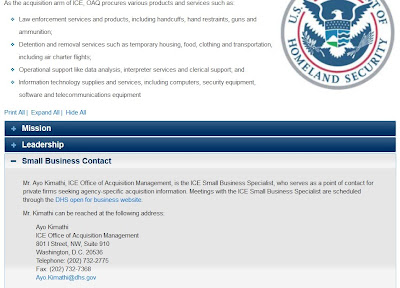 It's no secret that there are those in America who desperately want a race war; and you can make the argument we have enough evidence that at least some people have started fighting already.  DiveMedic at Confessions of a Street Pharmacist offers some evidence, but not all of it by any means.  I've chronicled some of it here myself.  Another senseless killing, two black youths killing an 89 year old WWII vet, happened just today.  The motivation for wanting a race war varies with the individual and it doesn't seem a stretch that some in the administration, and their Cloward and Piven devotees might be trying to gin one up themselves.   It's just the kind of thing that could allow the suspension of elections, or create the outcry from the general public to "make it stop", so the Fed.Gov and crack down and remove the last vestiges of civil liberty.

In the final analysis, I can't point at some reference I've found and categorically prove the DHS is planning a race war.  They're not that stupid.  Likewise, I can't prove this is just one employee acting on his own (certainly the simplest answer).  But as I said in that linked post of mine, I think the vast majority of the readers of this blog would agree that if someone publicly says they want you dead, you take them seriously. Don't let them catch you behind the curve.