United Launch Alliance is in the final moments of putting a new "WGS Block II", a Wideband Global Satcom satellite into orbit tonight, and we stepped outside to watch it at 8:29.  The vehicle was a Delta IV, a lighter lift version, not the big Delta IV Heavy, and with the launch 20 minutes after sunset, we got a good look at all four strap-on boosters tumbling away and then the payload fairing reflecting the sunlight as it tumbled away from the vehicle, climbing through 40 miles up (that's a guess).  Personally, I think the prettiest launches are around sunset, when it's dark dusk on the ground and the sun lights the contrail higher up, especially when it's a bright sunset pink.  I guess I've become a bit jaded, having watched almost every launch in the last 30 years.

ULA's webcast URL is here; they use it for all non-classified launches so if you hear of a launch from Cape Canaveral and want to launch, it seems to work better than Spaceflight Now and some of the other big name sites. 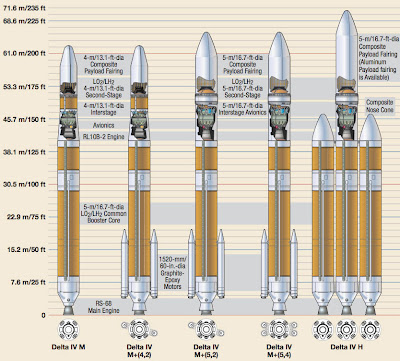 The one they launched tonight was the third form the left, M+(5,4).
Posted by SiGraybeard at 9:24 PM