I assume you saw the headline that Al Qaeda wants more lone wolf attacks to bleed the US economically.


In an audio speech released online a day after the 12th anniversary of the 9/11 strikes, Zawahri said attacks "by one brother or a few of the brothers" would weaken the U.S. economy by triggering big spending on security, SITE reported.

I think he's reading too much Klugman and that "green shoots" bull crap if he thinks he needs to do anything to bleed us.  We're doing a good enough job of it ourselves.  We're bleeding ourselves out faster than the clients calling the suicide hotline.

And for the occasional passerby who'll read this and say it's the war spending that's doing it, we could zero out military spending except veterans' benefits we've promised, send everyone on active duty home, dock every ship, ground every plane, park every tank, and open us to any attack imaginable, and still run a deficit.  We're still bleeding ourselves to death.  (sources: these overall revenue figures and these spending figures and my favorite, the Debt Clock) 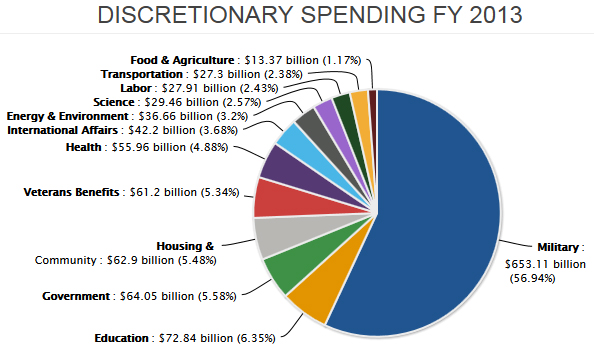 With an estimated deficit currently running about $800 billion for the year, you can see zeroing out the entire blue section still leaves you with about a $150 billion deficit.