We all know the saying kids are taught that "two wrongs don't make a right".

Babalu reports today that Poland has banned using the image of Che Guevara, along with any image that is identified with a fascist or communist system.


Poland's equality minister, Elzbieta Radziszewska, wants to expand a Polish law prohibiting the production of fascist and totalitarian propaganda so that it includes clothing and anything else that could carry an image related to an authoritarian system.
...
The proposal, which could see the faces of some of the leading lights of communist history such as Lenin and Trotsky removed from t-shirts and flags, reflects a Polish view on communism far different from the rose-tinted and romantic images often found in the West.

While I detest that murdering pig (Che) as much as anyone, and while I know the Polish people have had a closer experience with fascism and totalitarianism than any nation should have, fighting fascism with fascism doesn't seem like the right answer.  I prefer ridicule, and there's no better place than The People's Cube 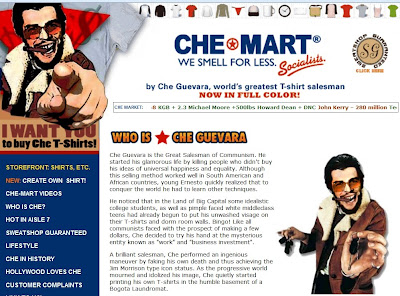