Do you remember the story hanging around from mid-July, just under the surface, about how the Fed.gov never let the official federal debt increase?  No one ever talked about it except a few of us crazy bloggers.


That entire three paragraphs from CNN is a lie.  Utter bull crap.  Because we would have hit the [debt] ceiling in May, the 18th to be precise, if the Department of the Treasury was telling the truth.  You see, they haven't adjusted their "debt clock" since the end of the day on May 16.  The reported debt has remained the same for 75 days so far.

Anyone except the most devoted Obama groupies knew this was fake; they were moving assets around like a New York thug's shell game.  Today, with new authority to borrow like the spending addicts they are, the Treasury reported the total debt exceeded $17 trillion for the first time in recorded history.


U.S. debt jumped a record $328 billion on Thursday, the first day the federal government was able to borrow money under the deal President Obama and Congress sealed this week.

The debt now equals $17.075 trillion, according to figures the Treasury Department posted online on Friday.

While I don't particularly trust the new number either, it was pretty plain that the numbers they were handing out since May were bogus.  In fact, they tell us as much:


The giant jump comes because the government was replenishing its stock of “extraordinary measures” — the federal funds it borrowed from over the last five months as it tried to avoid bumping into the debt ceiling.

Wait... they borrowed money to keep from raising the debt?  What?  How can borrowing money not increase debt?  What planet does that work on?  Let's let our friends at Demonocracy.Info show us what the debt ceiling we just crossed looks like, as pallets of $100 bills. 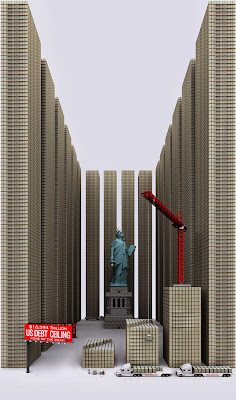 Just remember, the president said (only a few weeks ago) that raising the debt ceiling "does not somehow promote profligacy".  It doesn't increase debt. Then showed up minutes after the debt ceiling was raised with a list of things to spend money on.

I'm torn between wanting to retreat into the bunker o' doom and hide until the zombie raids stop and a morbid interest in how long it can keep going before everything collapses into a pile of poop.