I was going to pass on this story, but it ties so nicely to previous posts on universal assemblers making everything for us.  Alcoa has announced that its latest ArmX aluminum armor has been specified for use in US Army vehicles.


DAVENPORT, Iowa--(BUSINESS WIRE)--Alcoa (NYSE: AA) today announced its latest armor product is now specified for use by the U.S. Army Research Lab (ARL) for use in U.S. military vehicles. Alcoa’s ArmX® 5456-H151 armor plate meets the U.S. military’s highest performance standards for strength, blast absorption, and ballistics resistance for armored combat vehicles where weldability is a material requirement. Alcoa aluminum and armor have been used by the military for decades in vehicles ranging from the Bradley Fighting Vehicle to the Humvee. 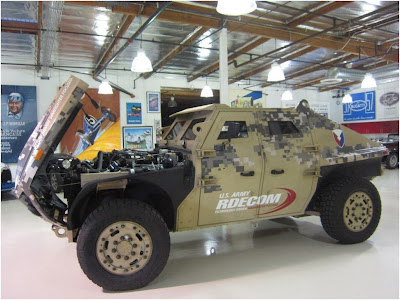 The product has been around for a while (backgrounder video here); this is a milestone in the performance they get out of it, though.

Now most of us think of the term aluminum armor as a contradiction in terms, like fiscally responsible Democrat.  Aluminum is soft.  You can cut so-called aircraft aluminum (typically alloy 6061-T6) on a woodcutting bandsaw you'd use for softwoods like pine, and that's the hard stuff.  Pure aluminum - I've seen some in shower curtain rods - is quite a bit softer and literally gums up a saw blade like putty.  This stuff is hard, weldable, and withstands explosions.  As they used to say where I grew up, "how yo did dat?".

That is certainly a trade secret.  They referred to the alloy as 5456-H151 and that tells us something.  5456 is the series, which Charleston Aluminum (a marine industry supplier) tells us


This alloy is primarily used in areas where high strength and better welding parameters are required in a marine vessel or other engineering applications. ... [T]his alloy has higher tensile strength than other marine alloys such as 5083 or 5086, and good corrosion resistance in a sea water environment, but not always the formability and corrosion performance of some of the other alloys.

Azom lists its chemical composition.  Now you know virtually everything about it, except that tricky part.  The tricky part is the H151 designation which encodes some information about how its treated and processed to give it the "better blast and ballistic performance".  That's where the trade secrets lie.  And that's the part where your nano assemblers will need to do extremely sophisticated things to all the atoms in the crystal matrices to get those special physical properties without the heat treating and other things they do.  All those things that nobody on earth knows how to do now.

I think a fair place to end this is the simple question, "Would you trust it?"   I'd like a lot more data.  See, in addition to being kind of soft, aluminum melts at pretty moderate temperatures. Like about 1220F.  That means that if the vehicle should ever catch fire, the aluminum will either melt (which is a really bad thing) or the heat treatment will start to reverse and the aluminum armor will revert to an untreated state (which might be an even worse thing).  For example, with 6061, another alloy designed to be weldable, it starts to lose its special properties as low as about 400 F.  Which tells me the armor will become much easier to shoot through.  Just when anyone behind it in a vehicle that was just attacked may need it the most.