A friend sent me a link to this video, a 6:24 look at the perception of income inequality in the US, and asked me what I thought of the arguments.  I'll wait while you go watch, I don't want to insert it inline...

As you may gather from things I've written here before, I don't particularly care very much  about whether 1% of the population has a really large portion of the wealth in the country - or if it's just a handful of exceedingly rich people like Gates or Zuckerberg or the rest of the Forbes 400.  There are many reasons, but the biggest reason is that they're just irrelevant to me.  They have no power over me.  My local county commission can make my life miserable with crazy new laws or taxes, and we all know how simply saying "No" to your local government always ends with your dogs (and often you) getting shot, but there is no way on God's Green Earth that Bill Gates or Michael Dell or the Mars family can make me buy anything they sell that I don't want.

But let's say you care, or you're talking with a family member, coworker or neighbor who are all upset about the CEO earning around 400x what the guy in the factory earns.  What do you say?  Where do you start?

A good starting point is a reply video by Learn Liberty, emphasizing income mobility.  When we look at these pictures, what we're seeing is a snapshot of the income distribution, and much like the snapshots you take with your camera, it's a moment in time.  I've read several papers that say that the income inequality, and large number of people in the bottom quintile is from immigration.  Without a constant influx of dirt poor immigrants we'd see steady growth, because of the steady move up through the quintiles of people working their way up.

But there's a more fundamental question: is the first video even right?  Is the income inequality he talks about even real?  A year and a half ago, I posted some research into a term called the Gini coefficient or Gini factor:


The Gini Coefficient is a measure of how much distribution there is in a variable.  If one person (or a tiny group) had all of the income in the US, the value would be 1.0.  If everyone had exactly the same income (socialist paradise), the Gini value would be 0.  The tiny change (I don't know if it's really statistically significant) is in the direction opposite of what we hear all the time; toward more equal incomes.  What about before 1994?  Ivan Kitof has done a similar analysis that goes back to 1947 (rather dense and chunky pdf here) that shows very similar trends.

Clearly, the Gini coefficient chart (below) is relatively constant, and nowhere near 1.0, so a tiny portion can't have all of the income.  That contradicts the income inequality video.  Among the interesting conclusions of the column on the Gini was that  "It implies that the difference is due to lower income households, and a very reasonable explanation is the increase in single parent households.  For an example, consider a two parent household with each making $50,000.  If they divorce, the two household/family incomes go down, while individual income stays the same (notice that if they stayed married and one became unemployed, the household/family and individual incomes would both go down). "  Instead of one household income in the second to top quintile, you have two in the lower one.  Bang: twice as many people making lower incomes. 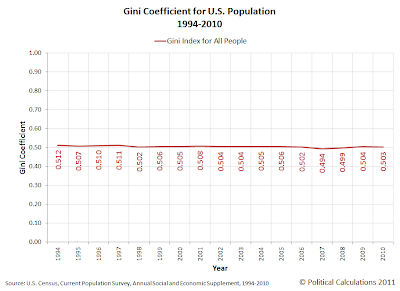 The social policies that lead to the destruction of families can explain changes in income distribution to more low income families.

I would suggest, though, that anyone who agonizes over what percentage of the wealth anyone else has is suffering from some envy problems and could use some quality time with a trained counselor.