Are We Witnessing Prophecy in Syria?

One of the Star Trek shows ventured close enough to the topic of prophecy to say something that has stuck with me since then.  I'll butcher the setup and all, but IIRC it featured Ensign Kira Nerys and other DS9 characters trying to decide if they were witnessing a prophecy taking place and didn't know if they should intervene.  The conclusion was that if it was prophecy, intervening couldn't be successful.  The outcome of true prophecy was going to occur as prophesied.  If they could intervene and change the outcome, it couldn't be prophecy.  A nice way of dealing with that conundrum.

Moving from Star Trek, to the topic I want to touch on tonight, the prophecy I'm referring to has been called the Isaiah 17 prophecy, the Psalm 83 prophecy or the "Burden of Damascus".  Isaiah 17 says,


“The oracle concerning Damascus. ‘Behold, Damascus is about to be removed from being a city and will become a fallen ruin. The cities of  Aroer are forsaken; they will be for flocks to lie down in, and there will be  no one to frighten them. The fortified city will disappear from Ephraim, and sovereignty from Damascus….’”

Most people, religious or not, have heard somebody talk about "Gog and Magog", from Isaiah 38, a different prophecy altogether.  Isaiah 38 is the one associated with Armageddon; again, most people have heard that word and know someone thinks of the battle there as "the end of the world".  There appears to be consensus among those who study such things that the destruction of Damascus will happen first.  Damascus is one of the oldest continually inhabited cities in the world, and has survived everything.

I've never been too much of a "prophecy nut"; I've always figured that my own, personal "end of the world" probably won't coincide with anything big.  A few billion people have thought they were going to see it happen down through history and didn't; why should I be any different?  I can argue against any end times prophecy as well as anyone, but given our world today, doesn't it seem at least possible that you could turn on the news some morning and hear that Damascus has been reduced to rubble?  (Excellent video here.  An hour long, but lots of detail). 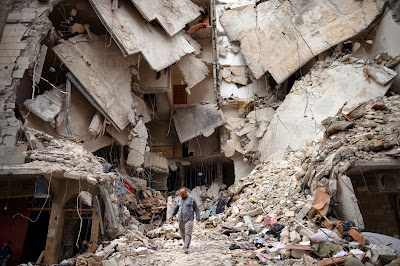