Is Manufacturing Going Away?

I think I've said this before, but I've been working in electronics manufacturing around Florida for a long time, almost 38 years.  There have been two constants during that time: one is a continuing refinement of processes to run more automatically and require fewer but higher-level people and the other constant is people telling me "we don't manufacture anything in the United States".  People assume that since TV production moved offshore and nobody has a portable MP3 player that wasn't made offshore, that we don't do anything here.  Nothing can be farther from the truth.  My career has been in industrial electronics, with some time in government work (10 years) and that's what is still being built in the US.  Our competitors are all here as well.

Credit this rant to Og, the Neanderpundit, who posted a story with links (to Sarah Hoyt) and a debate on whether coming changes completely eliminate heavy industry - what many people think of when you talk about manufacturing.  The replacement is a sci-fi concept of universal assemblers that move atoms around one by one to build everything.  The whole concept of assemblers/nannites/grey goo (the apocalyptic extension of the concept) may be new to people who don't read much speculative work, but here's the short version:  instead of building things from steel or aluminum alloys or the plastics we use today, we can create microscopic robots - nanorobots or nannites - which take the exact atoms needed to assemble something and put them in the required place.  A blob of these nannites, perhaps resembling a fluid or a goo, would eventually produce a fully built thing.  Imagine dumping tons of powdered iron and other metals into a tank, pouring a fluid of nannites over the powders and eventually a working locomotive emerges.

I think that's way more far-fetched than any of the advocates do.  It shows pretty basic ignorance of the reality of engineering.  Anything you see around you is very different on the atomic scale from the macroscopic scale, and different at scales between the atomic and visible to the naked eye.  Locomotives (or cars, or...) aren't made from iron, they're made from steels.  Steels in turn are made from iron, carbon and other elements.  The properties that make them useful are derived from the specific treatments that the alloy is given.  Pure aluminum is rarely used industrially; all structural uses you're familiar with use aluminum alloys, again the result of aluminum with specific metals and very specific treatments.  Very often, these are specific heat treatments that require lots of energy input.

I can see some sort of mining being done by a goo that gets poured onto an ore and separates out the desired metal atoms into a new solid while putting the impurities elsewhere.  Imagine going to a copper deposit and having nanorobots pull all of the copper atoms off and stick them together into chemically pure copper "lumps" while putting the other components of the rock: silicon, oxygen, aluminum, or other resources, into separate places.  Even that is exotic programming.  At the atomic scale, or the larger nanoscale, these concepts aren't well defined.  There are no edges, and there are no surfaces.  Where does it put the copper?  How close to the oxygen?  How does it know?  How do we tell the nannites when to stop?  What happens when they don't find copper atoms?  Do they keep expanding infinitely trying to find more copper?  Do they just "die" if they don't find copper in a certain time frame?  How do these things get powered?  It takes energy to break the bonds in the ore, it takes energy to move the atoms around and when it tries to put copper atoms in a "pile", their charges will repel each other, which will take energy to overcome.  Where does the energy to do all that come from? 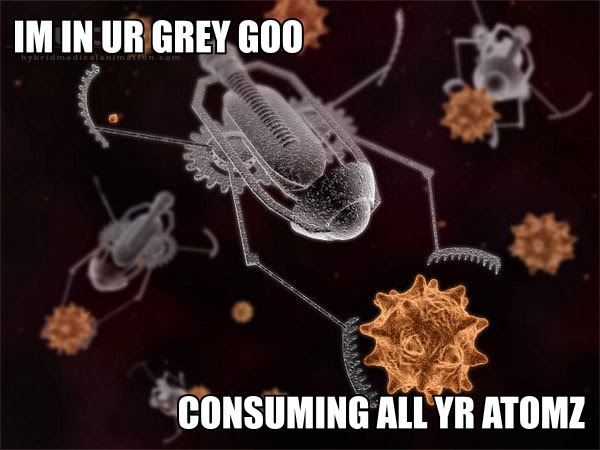 (source)
The hype cycle on 3D printing is farther along than the hype cycle for nannites, and will be playing out for quite a while.  I've come to agree more and more with the MIT Tech Review article I quoted here, that


...the notion that 3-D printing will on any reasonable time scale become a "mature" technology that can reproduce all the goods on which we rely is to engage in a complete denial of the complexities of modern manufacturing, and, more to the point, the challenges of working with matter.

Most likely for now, 3D printing will become a technology that gets integrated into manufacturing, to produce components which get built into other things.  A different sort of "machine tool"operation, as I've often written about the difference between additive and subtractive machining.

I think the ability to either 3D print, or have nannites build, your next computer, your iPhone27, or anything more sophisticated than simple plastic items you might use around the house is science fiction we're not likely to see.