A Position I Hope None of us Are Ever In

The big world news this weekend, of course, is that the Obamanoids orchestrated a prisoner swap with the Taliban in exchange for Sgt. Bowe Bergdahl.  Bergdahl was held by the Taliban for five years.  In exchange, the US gave up five high level Taliban leaders.  Random Acts of Patriotism has a list of the five and their backgrounds.

As he says, if it was my son, I'd be more inclined to swap anyone, pull any strings to get him back.  I'm sure a lot of people would, too, but our leadership is not supposed to react to emotion like that; they're supposed to uphold all the laws and act in America's best interest.  At a first look, it appears the Obamanoids did none of the above.  The executive is supposed to notify Congress if they plan to swap anyone out of Gitmo (but, apparently, don't require authorization to do so).  Worse, they've absolutely proven that we do negotiate with terrorists, we will bargain, and we're even willing to go way beyond a one-for-one swap.

As always, Obama believes he's above the reporting law and is not required to follow it:


When he signed the law last year, Obama issued a signing statement contending that the notification requirement was an unconstitutional infringement on his powers as commander in chief and that he therefore could override it.

The swap was arranged using Qatar as intermediaries, and the administration says the five prisoners being swapped will be banned from traveling out of Qatar for a year.  I'm sure that will be just as effective as the laws that keep prisoners from being armed in American civilian prisons.

Two things have always bothered me about this incident - before this weekend.  First, isn't it the case that every other American they've captured has not only been killed, but usually mutilated?  I know I've read reports many times that the Taliban and Al Qaeda don't keep prisoners for any length of time.  Isn't it, then, rather unusual this guy is alive in captivity five years?

Second, there are rumblings that the he wasn't captured; he went AWOL.  Even if not that far, others say the only way he could have been captured would have been to violate procedures, essentially going out alone.  The WaPo article says Bergdahl:


...bewildered his comrades after he walked off base in volatile Paktika province on June 30, 2009.

Today those of us not tied to the little blue bird from Twitter learn from Colonel Alan West that the guy's father put up a rather suspicious tweet briefly then pulled it down.  Someone associated with colonel West's page did a screen cap of the tweet before it went away. 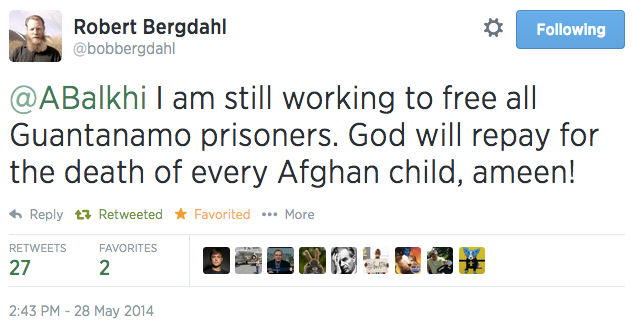 The address "@ABalkhi" refers to Abdulqahar Balkhi, one of the Taliban's (apparent) spokesmen.   Bergdahl's father appears to be telling the Taliban he's still working to free all of their prisoners in Guantanamo, and telling them God will repay (who?  America?) for the death of every Afghan child.  It seems that there's probably more here than just what's in the news stories.  This story just doesn't smell right.

EDIT 2020 EDT 0601: Check out author Brad Thor's observations on this affair over at The Blaze.  Major point: Sgt. Bergdahl wasn't held by the Taliban, he was held by the Haqqani network.


It is important to note that the Haqqanis are not the same thing as the Afghan Taliban.  The two are different groups.  ...  The Haqqanis are heavily tied to both Al Qaeda (providing them safe passage and support) and the Pakistani Inter-Services Intelligence agency, also known as the ISI.  The Haqqanis are a heavily criminal enterprise sowing and feeding off of the chaos in the Afghanistan/Pakistan region.  Envision Al Qaeda crossed with the Sopranos and you begin to get the picture of what these thugs are like.

Thor's central concern is that by making this deal, the Administration has drastically increased the risks of Americans traveling abroad being taken hostage by these networks, to get ransom money or to get key prisoners released.