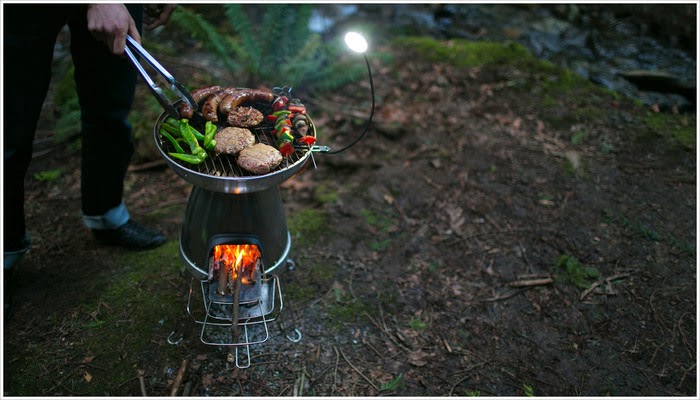 BioLite is best known for their Camp Stove - a small stove that burns wood cleanly and uses a thermoelectric generator to produce enough power at 5V to charge USB charged devices.  Some campers eschew technology of any kind and are completely opposed to it.  For my 2 cents worth, a tablet like a Kindle or iPad packs a heck of a lot of useful features to take with you.  Likewise an Android or  iPhone.  Virtually all of these include GPS mappers, and other useful information, or just a book to read when the day is done.  Obviously, it depends on where you're going.  If there's no data service, anything that needs to get data over the air to function is just dead weight.

The BaseCamp, as the name implies, is big enough to cook for several people (no dimensions, but they say it will cook "8 burgers", whatever that means).  Which means it would be just as useful here in hurricane country or in parts of the country subject to rough winter storms when the power goes out. It produces 5V at 1Amp, which should be enough to put a respectable charge into your devices, even if you don't run the fire a long time.  The value in an extended power outage or grid down event should be obvious.

Kickstarter means they aren't available now.  They expect to ship in October.  I thought some of you would think this is pretty cool.