There was a bit of flurry of news in the last few weeks when Google's long-standing program to develop autonomous cars made headlines again.  The idea isn't new, and has been the subject a long-running DARPA Challenge contest (like the X-Prize for commercial flight to space).  The DARPA Grand Challenge is in its 10th anniversary year. 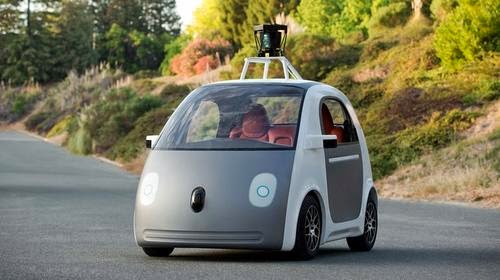 Design News posts this picture of one of Google's test cars - quite possibly the only car in the world that makes a Smart Car look sexy.  The awkward looking lump on the roof of the car is a LIDAR (Light Detection And Ranging or LIght raDAR); an array of 64 lasers used to measure the world around the car.


Built by Velodyne and known as the HDL-64E LIDAR, the new unit operates by making “time of flight” calculations -- it sends a pulse of light and measures the time it takes to come back. Therefore, it knows the distance to every object in a 100-meter vicinity. Its 64 laser lines are oriented on different angles, including up, down, and everything in between. A 5 Hz to 15 Hz user-selectable frame rate lets users tailor how much data the system grabs.

Of course, a self-driving car needs to be aware of more than just the distance to objects.  It needs to know what those objects are and how to behave around them, as Conan parodied.  Computers can be exceptionally bad at simple optical recognition but the car has to recognize anyone or anything else that might be using the road: pedestrians, cyclists, motorcyclists, buses, trucks of all sizes and animals.  Not just dogs or cats; I recall encountering a large bull on "Alligator Alley", a state road that crosses the Everglades between Ft. Lauderdale and Naples.

Autonomous cars are coming: how quickly probably depends on how safe they prove to be.  Nothing is 100% safe, certainly not human-driven cars, but if autonomous cars can be proven to have a significantly lower accident rate than human-driven cars, they'll be adopted quickly.   Can you imagine how fast ambulance chaser lawyers will be lining up to sue Google if one of their autonomous cars were to run over someone?  (They claim over 700,000 miles without a single accident)

The competition is not from other cars but from smart roadways.  Back in the 1990s, a consortium of universities did research on self-driving cars that relied on magnets buried in the road every few feet.  This is still being worked on.  Instead of measuring its surroundings with the LIDAR the Google cars use, these sensed the magnets to stay in the lane.  Meanwhile, radar and other sensors determined where the other cars were, and intercar radio links allowed "wolf packs" of  cars to go highway speeds a couple of feet from each other.  All movements were in sync and all cars aware of every other car.

What it's ultimately about is both reducing the number of accidents due to driver errors and increasing the carrying capacity of the roads.  I recall reading in the 1990s that to add the same amount of traffic to California freeways would cost about $1 Million/mile with magnets, but about $10 Million/mile by widening the roads and adding lanes.  But while those costs are impressive for widening interstate-type highways in urban areas, the technology will never make it to smaller roads in more rural settings.  If the cities can't afford to fix potholes, can they afford to drill holes and sink magnets every few feet?  That's where the autonomous car holds the advantage: the autonomous car is usable on any roads.  The autonomous car might well cost more than a car without the added electronics, but the car buying public pays those costs, not the municipal governments.

Engineering is always the art of compromise.