It's a few weeks early to do my semi-annual Solar Cycle 24 update, but NASA put out a report yesterday calling this the solar Mini-Max.


According to an analysis Bieseker presented at NOAA's Space Weather Workshop in April, the sunspot number for Solar Cycle 24 is near its peak right now.

They agree on another point, too:  It is not very impressive.

"This solar cycle continues to rank among the weakest on record," comments Ron Turner of Analytic Services, Inc. who serves as a Senior Science Advisor to NASA's Innovative Advanced Concepts program.  To illustrate the point, he plotted the smoothed sunspot number of Cycle 24 vs. the previous 23 cycles since 1755. "In the historical record, there are only a few Solar Maxima weaker than this one."

They include this plot, which shows all of the solar cycles observed in human history.  This one is in red.  By my count there are about five that are as weak as or weaker than this one. 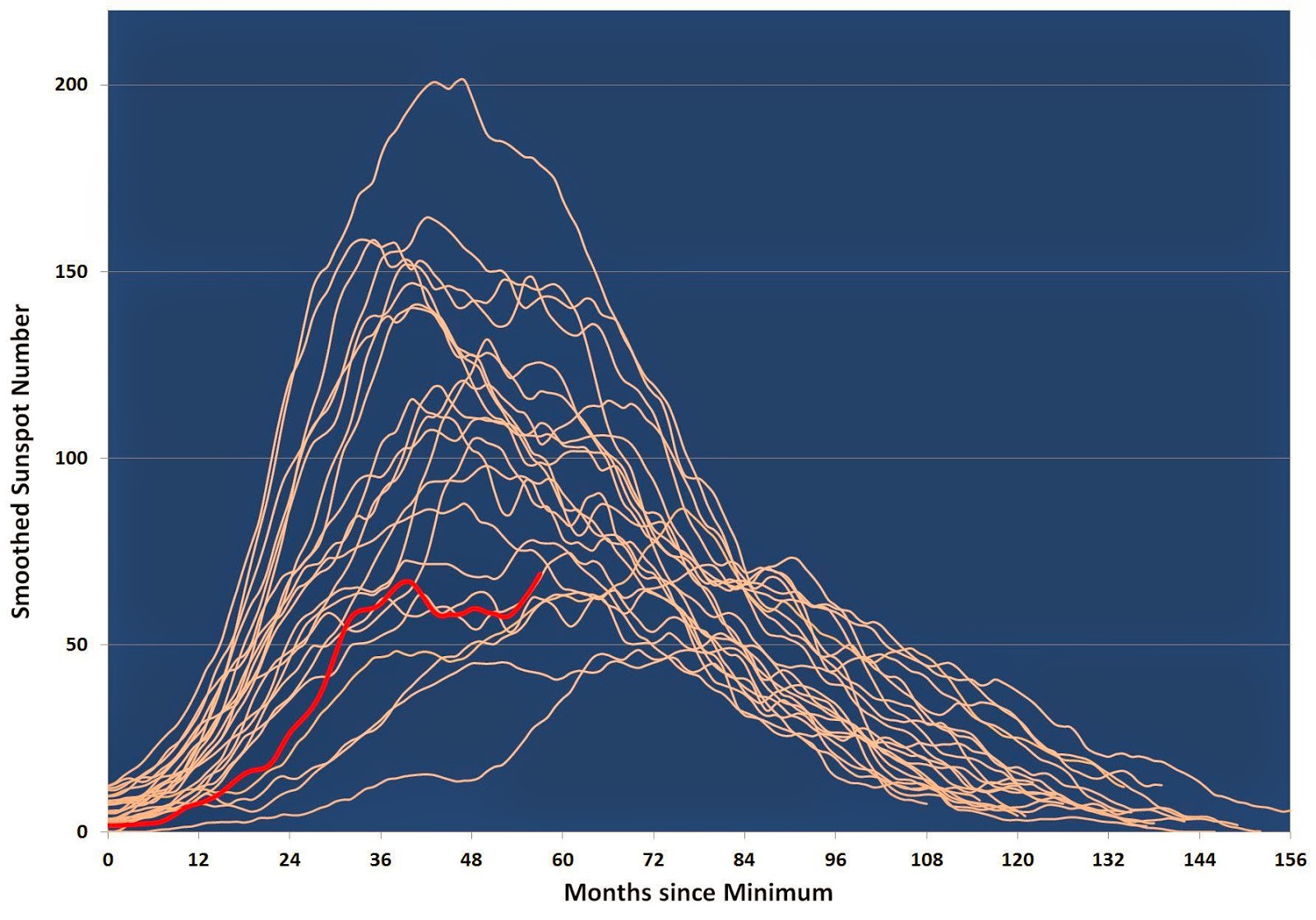 As I've posted before, this is the weakest solar cycle in 100 years, which means no living solar scientist has seen a cycle this weak, and our records of what the sun was doing back then have much less data than is now available.  In my mind that means their predictions on what the sun is going to do are more of a stretch than if they were based on cycles that looked just like this one.

My interest in solar activity grew out of the shortwave radio listening hobby I started as a teen.  That was in the cycle right after the strongest one on record, the peak from the late 50s.  Solar activity acts to increase the density of the ionosphere, which raises the frequency at which radio waves are bent back to Earth.  Following the highest frequency that will propagate between two points is generally the way to hear (or talk with) that far point with the lowest loss of signal.  If you're a radio listener, or ham on a low budget, it gives you the best shot at those far points.

Later I became interested in the sunspot cycle and how it affects other, more important aspects of life.  The link between solar minima, like the Maunder Minimum, and little Ice Ages is pretty well known.  Despite what the alarmists say about Global Warmening (or whatever they call it this week), mankind has done better in warm periods than cold periods in our history (huge pdf alert - but fascinating reading).

Although this plot is 5 months from my last posting, it's worth including.

I've always heard it's a Chinese curse to say "may you live in interesting times."  We certainly do, don't we?