The Difference Between Dedication and Insanity

It can be hard to decide if the right word to use is dedication or insanity when you see the efforts some people put forward.  I'm sure some of my hobbies and things I've done (thanks to my Attention Surplus Syndrome) would be considered borderline insane by regular people, so I have no room to talk.

With that in mind, take a look at what five years of dedication produced for industrial designer Luca Iaconi-Stewart.  What you're looking at is an incredibly detailed scale model of a Boeing 777 made from manilla folders and glue. 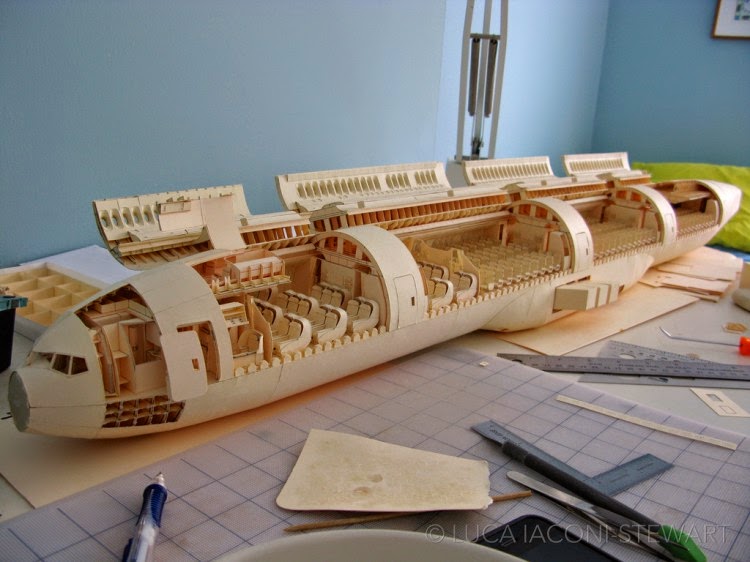 It took five years, a lot of manilla folders and glue, and tremendous patience, but designer Luca Iaconi-Stewart finally completed his 1:60-scale replica of a 777 jetliner. The model, complete with miniature seats, engine, doors and even retractable landing gear, is almost as complicated as the real thing.
...
Iaconi-Stewart fell in love with making paper airplanes in high school, so when he found detailed designs for the Air India 777-300ER he immediately took them into Adobe Illustrator and got to work with his X-Acto knife. It was no easy task. The engine took a month to design and another four to build, reports Wired. Each economy seat took 20 minutes to craft; 8 hours for first class. He rebuilt the tail three times to get it perfect.
...
The project eventually became so time-consuming that Iaconi-Stewart dropped out of his classes at Vassar to focus on his work. “I’m fortunate to have parents willing to give me a fair amount of latitude,” he says.

More pictures embedded in the various links, including one to his personal Flickr page. 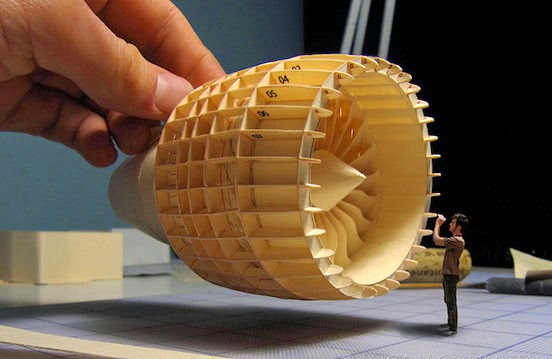 I think he added a model of himself on the right.

Dedication or insanity?  Insanely cool, if you ask me.