Well, this could be trouble.


Despite some reporting in the news services, she isn't really in charge of the Consumer Financial Protection Bureau, she's in charge of "staffing up" the agency.  The bill contained specific language that required the head of that agency be approved by the senate, but no less a liberal than Chris Dodd said he wouldn't vote to confirm her.  So rather than go through the senate, President Obama appointed her "to advise him on how to staff up the agency".

The point of this trip down memory lane is to highlight how the agency was born in controversy and continues that tradition.

Katie Pavlich, writing at Townhall, writes that the CFPB unilaterally granted themselves the power to shut down any business, anytime they feel like it.


Last week the Consumer Financial Protection Bureau, through the power of Dodd-Frank, passed a rule giving the agency unprecedented power to shut down businesses, no matter what the reason, at any time it wishes through a cease-and-desist order. Further, the rule puts businesses at the mercy of the CFPB and they cannot go back into operation until government approval or a court ruling is made over an issue. Subsequently because bureaucratic decisions and court rulings take a substantial amount of time to happen, businesses cannot survive during those waiting periods.

Katie makes the obvious connection to Operation Choke Point, a regulation passed with an easy-to-justify intent of cutting off bank support for businesses doing things like laundering money for drug cartels, but that's being used to pressure banks not to loan money to gun stores and other fully legal, honest businesses just because some politico views the business as "icky" (as AmmoLand writes) .  She goes on to point out that the US Consumer Coalition (just a sign up page) has come out with some strong pushback against the law:


"This unprecedented rule created by the CFPB grants the agency unilateral authority to literally shut down any business overnight. It is a doubling down of Operation Choke Point (OCP), the Administration's program to target lawful industries by intimidating banks from doing business with them. This rule allows the CFPB to immediately issue a cease-and-desist order, which terminates all business practices — and a hearing doesn’t have to be granted for 10 days, effectively shutting down businesses for at least 10 days. This is a 'guilty until proven innocent' tactic of the Administration that goes against every historical notion of justice under the law in America."

"The Administration got caught with their illegal intimidation tactics in Operation Choke Point, and now they are taking radical steps to ensure the goals of shutting down these lawful businesses are met. This is just the next step in using unaccountable agencies, with their ever-expanding agency powers, to meet the political goals of the Administration. This is a much more efficient way of shutting down lawful industries than just relying on intimidation. It is also no coincidence that this rule was released the day that CFPB Director Richard Cordray finished testifying at oversight hearings on the Hill." 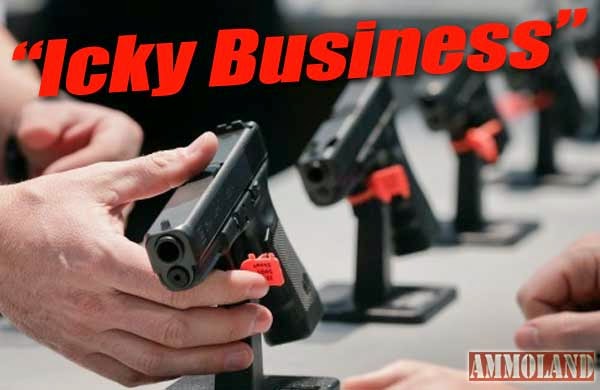 (AmmoLand)
I don't know who the US Consumer Coalition is, but I suspect they're funded by check cashing stores and payday lenders, two of the business types being most aggressively attacked by Choke Point.  It doesn't matter much, the statements they make are true if Katie's right, and I read her enough to trust her.