I know you've heard the term because both Borepatch and Denninger have posted on it; it's also one of the big buzzwords in the electronics industry now.  It even has conferences of its own.

So when an industry writer takes on the Next Big Thing, I find that encouraging.  Especially, this thing.  Author Junko Yoshida, Chief International Correspondent for EE Times writes in "Convince Me Why Washer Must Talk to Grill":


MADISON, Wis. — At the risk of sounding a bit curmudgeonly, I have to confess one thing. While there’s certainly something positive to be said about the Internet of Things (IoT), I can’t help feeling suspicious, weary, and a bit turned off by the whole idea.

Aside from big-number projections (e.g., Cisco predicts 50 billion IoT devices by 2020), which would tempt anyone into becoming an IoT cheerleader, I haven’t seen a single credible-use scenario that might lure the average consumer onto the IoT bandwagon.

Honestly, it creeps me out to think about my devices at home talking to one another, doing stuff without my involvement, and talking about my habits -- good and bad -- to total strangers (advertisers, service providers, or just more machines), behind my back. There’s nothing warm and fuzzy about this. At all. [Bold added - SiG]

That emphasized text raises an important point.  Those of us in the technical fields have a tendency to think of something that would be cool and then do it simply because it can be done.  On the other hand, the vast majority of people are not technophiles like us who do things because we can.  They want to know just what they're getting for what they spend on the interconnectedness and thanks (in my opinion) to Edward Snowden, they increasingly want to know what privacy they're giving up to get that interconnection.  Yoshida continues:


With this in mind, I’ve started asking industry sources for credible scenarios under which IoT devices improve my life by talking to each other. Readers are welcome to chime in below. Give me your best shot. Convince me why my washing machine needs to strike up a conversation with my gas grill.

The answers leave her flat.  They're the same old home automation stuff that's been sold and resold for years.  Oooh: a house that knows you're in the living room and can turn off lights for you, or change the temperature while you're coming home from work.   The thing is, when you leave the trite and unoriginal, you end up at creepy pretty fast.  Richard Doherty, research director at something called the Envisioneering Group says:
In my mind, all of those get darned close to (or jump over) the "none of your damned business" line.  I admit I would have felt better about my elderly mom living by herself with the first one (assuming she agreed to have it), but I'll have no part of the other two.  But they go on from there into asking who controls what information is being handled and how it gets around.  Predictably, the industry giants are starting Sumo matches; throwing salt and trying to force each other out of the ring.  Intel, Qualcomm, AT&T, Time Warner and Google (among others) all want to be the one to see you crank your thermostat warmer some winter and promptly send you an ad for sweaters. 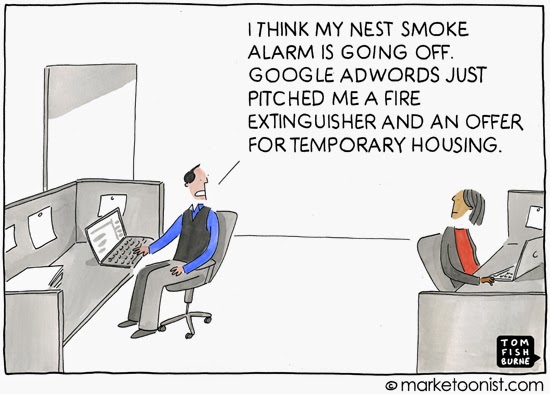 (source) Creep you out, yet?