Miguel at Gun Free Zone reminds me that this is the tenth anniversary of Hurricane Wilma hitting South Florida.

Wilma was a strong Category 3 storm when it came ashore the west coast of Florida (Cape Romano, part of Marco Island) with 120 mph winds, but it was assisted by a strong steering current pushing it to the Northeast.  Wilma still holds the record for the lowest barometric pressure ever measured in the Atlantic Basin, at 882 millibars (26.05 inches Hg) while still in the Caribbean basin, and the cost across all affected areas goes up to $29.394 Billion dollars.

Wilma wasn't a major storm for us, although I see from a NOAA web page, that the Kennedy Space Center (about 30 miles north of home) recorded the highest rain total from Wilma at 13.26", and there was a wind gust of 94 MPH.  I think of it as just another tropical storm.  My brother in South Florida lives much closer to Wilma's path and lost his roof shingles, which had just been replaced after the 2004 hurricanes.

My main memory from Wilma was that the frontal passage that followed the storm brought in strong, cool NW winds, and while hosing leaves and debris off the cars, it was the only tropical storm cleanup ever that I felt cold. 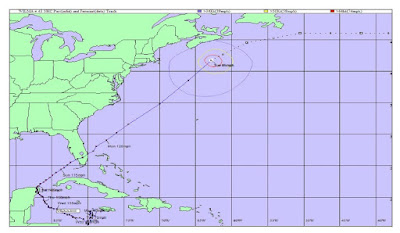 Posted by SiGraybeard at 1:22 PM