Free College For Everyone!

I didn't pay too much attention to the Evil Party debate this week.  Didn't watch a minute of it, but since I do keep up with the news, it wasn't hard to grasp the essence of the debate:  Free Stuff for All!  Free health care!  Free College!  Wage Inequality! Greed!  Free stuff for everyone, except of course those who have to pay for it.  Those people won't get anything.

Matt Walsh, a blogger for The Blaze wrote a really good piece on the debate, "Democrats Are Godless Heathen Tyrant Maniacs Because That's What Voters Want" - I suspect that's a deliberately over the top title.  It's a must read.

I just want to address one thing:  Free College.  Now we know that Free simply means someone else pays for it, and Comrade Sanders says he's going to tax Wall Street.  Because those costs will never be passed on to anyone, right?  Still, it's a plan that's going to attract the coveted young moron demographic along with the "let someone else be responsible for me" crowd; both are core Democrat constituencies.

Here's a couple of rough numbers for you.  The college age population of this country is roughly 22 Million people.  That census data on Wikipedia is for 15 to 19 and 20 to 24 year olds; both ages were close to that.  According to this statistics page, just over 2,136,000 Associates and Bachelor's degrees were awarded  (not sure where they come from, exactly, but the date says April, 2015).  In other words, 1/10 of the eligible population completed two or four years of college.  I include the two year associates degrees because since Sanders said four years of public college should be free, I assume he meant "up to" four years.

It's a straightforward argument that we have far too few seats in college for the number of butts that want to occupy them.  Why do I say that?  College costs have increased at three times the rate of general inflation so if prices are going up like crazy, there's shortage of supply.  The cost increase is aided by the Fed.gov's willingness to supply educational loans at a virtually infinite rate.  Colleges find themselves in the happy place of being able to charge anything they want for those seats, and the butts that are going to be sitting in them will gladly take all the money from the Fed.gov and transfer it to those colleges.   Of the 22 million college-aged people, vs. 2.1 million who graduate, how many would go to college if it was arranged for them?  Do we need to build more colleges and hire more staff to get more seats available?  For what?

As we're seeing emphasized recently, a college degree doesn't guarantee a well-paying job; meaningful skills do.  There's a tremendous emphasis on STEM degrees, but my guess is we're graduating too many now.  Data is saying only 1 in 4 graduates is getting a job in one of those fields.  It's true that those pushing for more STEM graduates have included fields like psychology, and social science degrees such as economics, anthropology, sociology or political science; anything that can throw the word "science" into its name.  These aren't the type of jobs that Silicon Valley (or our own Silicon Swamp) is looking for.

Besides, it displays a stunning ignorance of how the world works.  Comrade Bernie and Comrade Chancellor Hildebeest are saying that since some college graduates appear to have an increased value in the job market, we should create more of them.  This shows complete ignorance of the law of supply and demand.  If people coming out of college make more than those who didn't go, it's because they are worth more to employers.  To create more of them is to reduce their differential value and make college even worse of a deal than it is for so many graduates today. 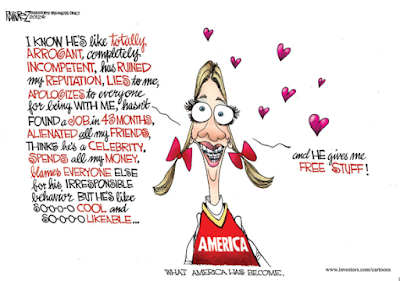 (Michael Ramirez in 2012, but just as valid today)