Today was rather unusual day for me at Major Avionics Corporation.  Our products are required to be certified by the FCC, and due to all of the things that have to be completed before the data can be taken for their tests, FCC tests tend to be among the last things we do during product development.  As anyone who has worked in any industry will instantly know, that means the project is just about guaranteed to be running late and almost out of money by the time this needs to be done.  So they want it done in one pass, as fast as can be, with no room in the schedule for finding and fixing a problem.

Lately, we've been contracting with a one-stop-shop that does a lot of the nasty paperwork for us (for a fee, of course).  They know the technical testing issues very well, but naturally don't know about the system they're testing, so we need to send a technician with all the hardware and software they'll need to run our system, and we also typically send a systems engineer to work with their test engineer.  Now, I'm not considered a systems engineer; I'm a design engineer.  On the other hand, I know the radio aspects of the radar better than the systems engineers.  After rumblings and rumors that it was going to happen, yesterday I was directed to be at the testing facility to answer any technical questions the testing authority might need to ask.  The kicker is we had the place reserved for one day (see "almost out of money", above) and the place is near Gainesville, Florida, just short of 200 miles from home.  I needed to be there when they were ready for us at 9 AM and to stay until we were done or they kicked us out.  That meant I was on the road to Gainesville a few minutes after 6 AM, instead of getting out of bed for work like usual, and was figuring I'd be home by 6 PM as best case.   As it worked out, I was there by close to 9:30 and I made it home by 6:15.  The day went as well as it could have, although I don't know if we passed.  The contractor needs to do post-processing on the data they took to see.  But I've never seen a box that passed our internal qualifications testing to aviation industry standards then fail the FCC tests.

This probably sounds like I'm bitching; I'm not.  It's part of working for a living, which most of us still are.  I'm just making excuses for why I haven't put up any free ice cream since Wednesday.  So here: the essence of the 2016 presidential campaign, as seen by Rick McKee: 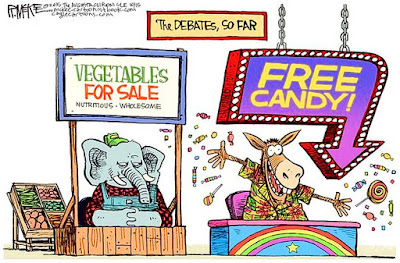