Tyler Durden at Zerohedge reported that butter set a price record of $3.10/lb on the Chicago Mercantile on September 24th, but since then, prices have ... well ... melted down to $2.51/lb by the end of the month.  A very abrupt bubble, probably brought on by concerns over the California drought. 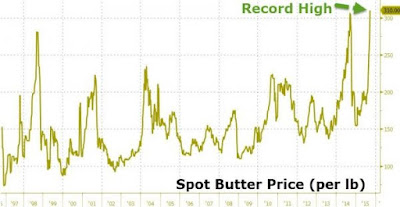 Now ZH's point is that this sort of inflation is completely disregarded in the inflation numbers that the fed.gov reports.  According to their hedonics adjustments, because you can get a more powerful computer this year for the same price as the previous models, or a little more, the better/faster computer actually led to a decrease in your cost of living.  Even though you paid more for it.