Techy Tuesday - Single Board Computers For Fun and Profit

Every now and then something comes up that would be nice to throw a controller on.  Maybe it's some home automation tasks, maybe it's something like adding a TOR relay, who knows?  It's just something you don't want to tie up a computer for.  Enter the cheap single board computer (SBC) like the Raspberry Pi mentioned in that first link.

With the Pi, now at  Model 2B, these are fully functional computers that are on a par with good cell phones; in other words, a functional desktop PC from around 10 years ago - for $35.  It features a 900MHz quad-core ARM Cortex-A7 CPU, 1 GB of SDRAM, USB and Ethernet connectors.  It can run the full range of ARM GNU/Linux distributions, including Snappy Ubuntu Core, as well as Microsoft Windows 10.  Yes, you read that right; this single board computer can run Windows 10 (not sure why you'd want to, but maybe that's just me).  Raspberry Pi is the most popular single board computer, and you may be able to simply search for an app for something you'd like to do and find it in the community.

Besides the Raspberry Pi, the other big name in this space is the Arduino.  Compared to the Raspberry Pi, they appear aimed more at controlling things.  Instead of four USB and an Ethernet connectors, they have pin sockets.  A beginner package, the Uno, is a microcontroller board based on the ATmega328P. It has 14 digital input/output pins (of which 6 can be used as PWM outputs), 6 analog inputs, a 16 MHz quartz crystal, a USB connection, a power jack, an ICSP header and a reset button. It contains everything needed to support the microcontroller; simply connect it to a computer with a USB cable or power it with a AC-to-DC adapter or battery to get started.. You can tinker with your UNO without worrying too much about doing something wrong, worst case scenario you can replace the chip for a few dollars and start over again.

Trade magazine EE Times runs an article on a group of these single board computers.  Between the Raspberry Pi and the Arduino, you'll probably find more source code and more projects than for any other boards.  Or all of them put together.

An interesting idea is the HummingBoard-Gate, a computer that emphasizes small add-on sensors called Click Boards.  There dozens: a GPS receiver, Stepper Motor Driver (hmm - one of these for each axis of a CNC system?), three axis accelerometer; over 150 to choose from.  You could also connect your own basic sensors using a 36-pin GPIO header and 4 USB ports.  However, the board doesn’t come with any memory storage and starts off with a single-core Solo chip and 512 RAM for a whooping $50.  Adding a faster processor, storage, and WiFi and Bluetooth and bring your investment up to $235—that’s before the addition of sensor modules.  As you can see, The HummingBoard-Gate adds all the flexibility you could want, but it brings a price.

I've still never played around with any of these SBCs.  At $40, I think a Raspberry Pi is in the near future. 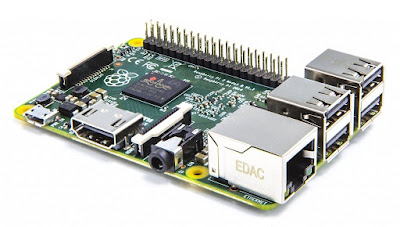