All the paperwork is in place for me to be out by the week before Christmas, so I went looking for the annual Florida Dry Season Forecast.  As you've probably heard, a strong El Nino is developing in the equatorial Pacific.  The effects on Florida are pretty well understood, and while they don't set the absolute forecast in stone, they do create a direction.  It looks like this. 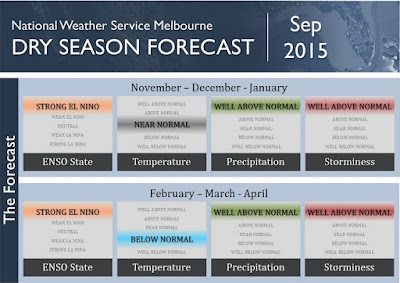 Hmmm.  Both precipitation and storminess (don't they go together?) are predicted to be well above normal, with normal temperatures through January, and below normal until April.  This is, after all, our usual dry season.  My impression is that December brings more rainy cold fronts than January.  I have many memories of adjusting outside lights after cold rains before Christmas, but I also have lots of memories of bike riding on achingly beautiful days in January and February.  Our coldest time tends to be January - sometimes extending into mid-February

Sounds like I'm likely to be spending more time in the shop than fishing for the first few months.  Not that there's anything wrong with that.