Giving Janet Yellen A Run for Her Money

When it comes to spreading money around, Janet doesn't really have anything over Abenomics in Japan.  Last week, the Development Bank of Japan announced they're going to pump 100 billion yen into the development of Mitsubishi's Regional Jet, the first domestically developed and built plane since 1962.  (Although Mitsubishi produced at least one famous aircraft before that).  Yen are under one cent in exchange rates, so that comes out to under $1B US; closer to $824 Million.


The money will mostly go toward facilities to build, maintain and repair the MRJ, Japan's first domestically developed and built plane since the turboprop YS11, which first flew in 1962 and is no longer in service in Japan. Some of the funds will be also used for capital investment in parts suppliers.

The support from the state-owned bank is aimed at easing the financial strain at Mitsubishi Aircraft, the Mitsubishi Heavy unit in charge of the project. The parent company also plans to raise money from other sources.

The DBJ's investment is part of its plan to put 500 billion yen over five years into various projects aimed at improving Japan's industrial competitiveness.

Japan, of course, has been in a decades long period of "suspended animation"; low growth, to no growth to contraction.  Abenomics (pronounced ah-bay-nomics) has been the usual collection of central bank tricks we're seeing here in the US: quantitative easing, fiscal stimulus and the ever-popular structural reforms.  In addition to the money they're using to prop up Mitsubishi Heavy Industry, they're also giving money to their ship building industry.

20 years of it hasn't worked in Japan, but they're doing it again, only harder.  And Janet and her crew is swearing it will work here.  You know, "this time is different (tm)".  Just like they've said before every other crash for the last 800 years. 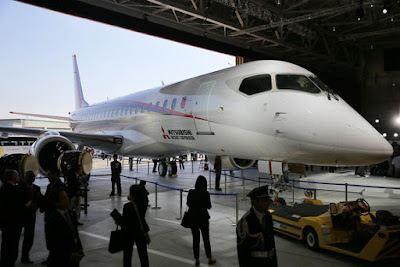 The flight test prototype of the Mitsubishi Regional Jet.