Not just a gun show, but a gun and fishing show.

Today, Mrs. Graybeard and I drove an hour south to Ft. Pierce for the Florida Sportsman Expo held outdoors at the county fairgrounds.  Florida Sportsman is a magazine dedicated to the state that covers fishing, hunting, shooting, camping, diving and basically everything you'd want to do in outdoors sports.  I know a lot of you north of us on the east coast are suffering through snowmageddon so I don't mean to sound silly, but it was cold today by our standards.  It made it up to about 60, but there was a NW wind at about 20 steady and gusting to 35 or so.  Yeah, I know, many of you think of that as car washing weather.

At the fishing expo there were various boats on display, kayaks, and other man-powered, skinny water fishing boats, plus custom rods, lots of reels, tackle, and lures like DOA Lures and USB Lures.  Pretty much everything you'd need to outfit a fishing addiction.  The fishing show, though, was in an equestrian events building that offered no protection from the wind.  With sun blocked out by the building, the wind was rather difficult to bear, and I had good rain jacket/windbreaker on.  Before someone says it, I know the term "dress in layers", but it isn't part of my everyday life.  Plus, I expected the expo to be indoors, based on the photos at the FS Expo website.

Running alongside the fishing expo was a gun show.  The gun show wasn't particularly good.  The venue was two small side buildings, and there was hardly anything to see.  The most interesting thing I saw was that a Mossberg 715T, their AR-lookalike .22LR semiauto was going for less than a plain old Ruger 10/22 with the basic wood stock.

So we drove about 130 miles, spent $12 to get in, didn't see a thing worth buying and spent three hours to find that out. The worst part was that I managed to get my two wheel drive Exploder stuck in mud looking for a parking spot.  A nice guy with a 4WD Ram gave me a tow out back to firmer ground. 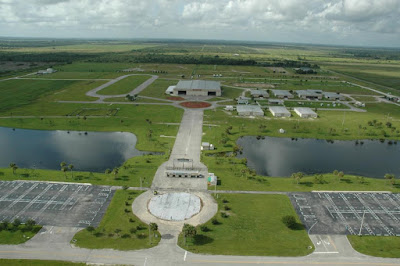 The Fairgrounds looking more or less south.  Fishing was in the big building in the back behind the red circle. The gun show was in two of the three smaller, squat buildings to the right and in front of the circle.