Long time readers will know I tend to talk about firing up the smoker and barbecuing a pork butt or brisket or whatever is around, especially on holidays.  I say that barbecue is two of the four basic food groups:  barbecue, bacon, barbecue and fruit.  Much of what people think of as vegetables are really fruits from a biological standpoint: corn is a fruit, squash, zucchini, green beans, and tomatoes are all fruits.  When you get down to it, virtually all non-leafy, non-starchy vegetables are fruit.  Coffee comes from coffee beans, the seeds in the fruit of that plant, which makes coffee sorta like a fruit juice.

There's a distinction between barbecuing and grilling.  Grilling is throwing a hunk 'o meat (or whatever) over hot charcoal and cooking it in about the same time as you would on your kitchen stove.  Barbecue is "low and slow".  Low temperature; slow cooking.  My bias is that Real Barbecue is done in a smoker, which can be fired in any number of ways: wood, propane, electric, anything that will heat the wood to the smoking point.

If you 'cue, you may have made a fatty (or fattie) - or heard of them.  I came across the idea on some barbecue forums; people talking about "smoking a big fattie".  I was puzzled, but went off and read.  I made my first one this weekend.  A fatty is more like a template than a recipe, and there's almost as many versions as there are people making them.  The basic idea is take about a pound of pork sausage or ground beef, form it into a thin sheet with something like a rolling pin, and then roll that up around some stuffing of some sort.  The stuffing could be just about anything; I've seen guys put spinach in theirs, diced ham, potatoes, or even scrambled eggs.  One guy just took the wrapper off a one pound roll of sausage, rolled that in the dry rub mix that folks use on ribs, and smoked that. 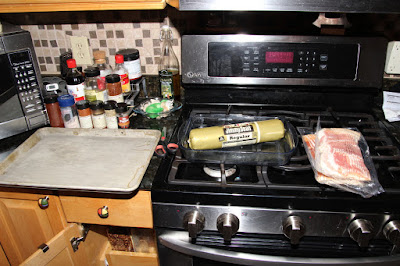 This was my starting point: a 2 pound package of Jimmy Dean pork sausage and two packages of bacon.  Using wax paper on that cookie sheet, I spread it out into a thin layer, added fillings, and rolled it up into a round sorta-meatloaf.  I stuffed it with provolone, mushrooms and salami slices with some garlic and red pepper.  (This is before the mushrooms and spices.) 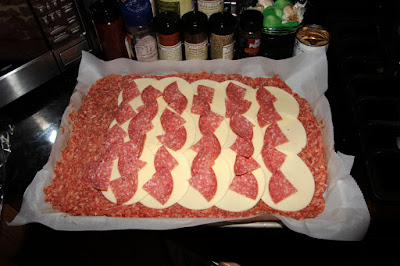 Then I rolled it up into a package of bacon made into a basket weave, like this: 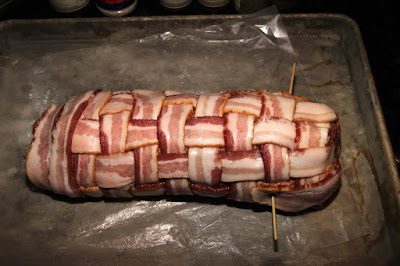 Since I started out with a two pound package of sausage, it turned out too big for the bacon weave.  No problem, we just wrapped some more bacon around the ends, and then skewered them to hold them in place.   Into the smoker at 230F with hickory chips and four hours later, when the internal temperature hit 165, this is what came out: 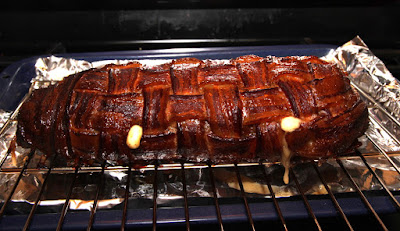 Those white things that look like plugs?  That's molten provolone cheese coming out from where the meat thermometer probes were.  If you're keeping score, it's a bacon-wrapped, cheese and salami filled, pork sausage roll.  Bet you can see where the name fattie comes from! 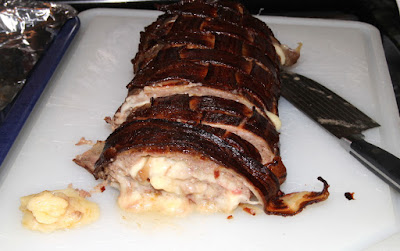 Seems like something to experiment with once a month or so.