The Long Story of Z

When we last talked about the Z axis for my G0704 CNC Conversion, I had just completed boring the big hole to clear the ballnut housing.  Then I got a virus, took a week off to visit the granddaughter, and, well, next thing you know, it was June.

As I said in that piece, the next task was to drill and tap six 1/4-20 holes to match the ballnut. I barfed it up. The holes were far enough off that I could get only one screw in the ballnut at a time. 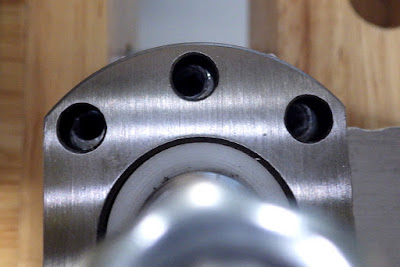 Now what? I've never relocated holes before, but it really is a fundamental skill we should all have. I know in commercial shops they may drill it out larger and put in a Heli-Coil, or use a welder to fill it, but I don't have a TIG welder and wouldn't know how to use it if I could borrow one.  So acting on the advice of a frequent visitor here, I got a quarter-inch diameter aluminum rod, turned it down enough to thread and made 1/4-20 aluminum screws to plug the holes with.  Used red Loctite to hold them in place, sawed them off with a slitting saw on my Sherline, then milled them just a little proud of the surface (like .002" high) with the G0704. This picture is with it still on the Sherline, before I milled them down. 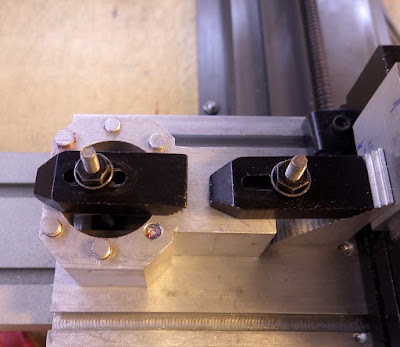 I think my error was in setting my zero on the Sherline before I drilled, because after flipping the part, finding zeroes again, and putting a small peck at each hole with a center drill, the marks all appeared to be in the right place.

My adviser also suggested that since I have the master pattern (the ballnut that it has to mount), why not make a tool to fit in the holes that will better center a drill and mark the mount that way? So I turned down some 1/2" aluminum rod to fit the holes in the ballnut, then drilled them on the lathe for a 1/16" drill bit. I made four and put them in the four corner screw holes in the ballnut, and clamped the ballnut to the mount with C clamps. Drilled the holes with a 1/16 bit. Broke the first bit and while muttering obscenities and looking for the next size up to continue, found that "someone" had bought and stashed three 1/16 bits. No more excitement because I remembered to use just a tiny dab of tapping fluid. Once the four were drilled, I moved two of my tools to the center holes, re-clamped, and drilled them.

Moved it to the G0704 and mounted my drill chuck. Carefully centered the bit six times, using a 7/64 bit, then six more times using the bit that came in my old Craftsman drill and tap set for 1/4-20. While drilling the larger holes, I could feel that sometimes the drill advanced way too easily. Turned out that two of the threaded aluminum filler screws had backed out. So I put them back with more Locktite. The result: perfect fit. 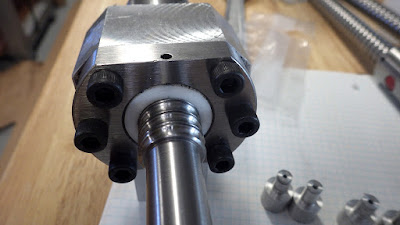 The little tools are in the lower right.  These have a half inch head to grab with a turned down section that fits in the ballnut with a tight fit, and are center-drilled 1/16".

This part also has two holes in its base, perpendicular to these screws.  Those are drilled and tapped 5/16-18.  I won't be able to tell how well they're done until I have the mill apart to modify.

So that's where I am now.  X, Y and Z ballnut mounts are complete.  I'm down to four parts to make: the X and Y motor mounts, the Y axis spacer and the X-axis end cap. The end cap has a lot of machining that needs to be done, and I think I'll do that last. I spent a lot of time making this part, though, so I hope I pick up some speed.  My first mention of it was May 1.  Even subtracting the week vacation, nine or ten days out of the shop, I spent close to four weeks working on this part.  I don't think any machine shop would hire me with time like that.  Not that I care.

Posted by SiGraybeard at 6:00 PM