And The Stupid Just Keeps on Coming

I didn't watch any of the president's talk at the Dallas memorial service the other day.  I knew it was going to be filled with stupid, and the clips I heard were actually worse than I expected.  It was embarrassingly bad, so predictable in its messaging and tone that it could have been any hack Hollywood writer trying to make up what a doctrinaire Marxist would say.  It's hard to come up with the kind of consistent, day after day stupidity that he does, but he's fully automatic: 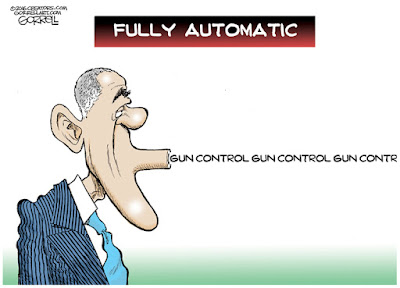 As soon as anything triggers him, he goes into an automatic gun control rant.  Any incident whatsoever gets the same response.  Has anyone else noticed how the Orlando Pulse night club shooting went from being reporting by everyone as the "worst terrorist attack since 9/11" to the "worst mass shooting in US history"?  I noticed it being reported that way on Fox News some weeks ago and it bothered me.

Of course, the difference is that if it's a terrorist attack, Obama may have to blame actual terrorists.  Actual Islamic State terrorists.  God knows he's incapable of doing that.  If it's a mass shooting, he can blame the guns, as always.

Even last week, when we have testimony from the Dallas chief of police that the killer told them he specifically wanted to kill white cops, as clear an example of race-based terrorism as you get,  Obama went into full auto mode, reprising what I think is his most idiotic argument of all, that it's "easier for a teenager to buy a Glock than get his hands on a book".  In what country?  On what planet?  In the US, it's a federal felony; a teenager can't walk into the local gun shop and buy any firearm.  Do you mean they commit the felony and buy a stolen gun off the street?  Oh, that's right, you guys don't have the time to enforce those laws, so you want to create some new laws you can not bother to enforce. 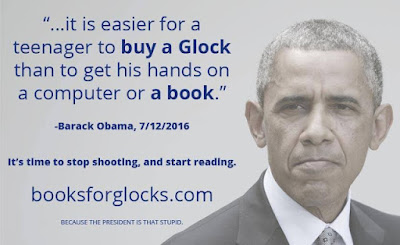 Donald Sensing at Sense of Events does a great satirical piece on this preposterous lie, which I'm going to copy mercilessly here.

Outraged at this unacceptable situation, Apple Computer CEO Tim Cook announced that beginning Aug. 1, all teenagers and adult customers of Apple computers and devices will be able to buy Apple products as easily as they can buy a Glock pistol.

"It will be very simple," said Cook after touring the Glock factory in Smyrna, Ga. "From now on Apple products will be sold to teenagers using the same criteria used for them to buy a Glock. It's only fair and I am sure the president will agree."

"These are only common-sense measures," Mr. Cook said, "and they will make sure that every teenager, especially in Chicago, Detroit, Baltimore and other Democrat-administered cities in America, will find it no  more difficult to get their hands on an iPhone or MacBook Pro than on a Glock."