For decades, now, researchers have been turning more and more to studying biological systems to try to understand how they work.  The incentive is usually that the biological systems do things that no one has figured out how to do, or do things better than any system humans have come up with.

Design News brings a story this week of a biomimicry experiment at University of Wisconsin - Madison.  The aim is to produce a digital camera system that sees in less light; as close to total darkness as possible.  Their bio-inspired photosensitivity enhancer (BPE), is an "artificial eye" which was inspired by creatures that live in deep or murky water, where light is scarce.


Most efforts to develop such a device have focused on improving the sensitivity of the image sensor. But Professor Hongrui Jiang of the UW-Madison Electrical and Computer Engineering Department and his team have instead concentrated their efforts on the optics that focus the incoming light. The team hopes their technology can someday be used robots, space exploration, and even medical applications like endoscopes and X-rays, where highly photosensitive sensors could be of great benefit. "Inspired by natural scotopic visual systems, we adopt an all-optical method to significantly improve the overall photosensitivity of imaging systems," the researchers wrote in a paper published in Proceedings of the National Academy of Sciences (PNAS). "Such optical approach is independent of, and can effectively circumvent the physical and material limitations of, the electronics imagers used."

Their model was the elephant-nosed fish, found in the Niger River basin in muddy, slow-moving water.


As the name suggests, it has long slender protrusion that looks like a nose, but is actually an extension of the mouth. It uses an electric field to help sense its surroundings. But the fish also has unusual eyes with a combination of photonic crystals, parabolic mirrors and a clustered arrangement of rods and cones that help it to see in the dark. This clustered arrangement on the retina is composed of thousands of tiny crystal cups rather than the smooth surfaces common to most animals.

The water these fish live in is so turbid that light barely penetrates it. The fish don't have color vision because in water that murky, the blues and greens are filtered out in the highest surface layers, literally only penetrating a few centimeters. Only red light penetrates to the bottom, so they only have retinal cells sensitive to the longest wavelengths. Their unusual, cup-like retinal structure actually presents images to them that aren't very detailed, which ends up being strangely good for them.  The fish don't focus on the small details like gas bubbles or sediment in the water around them. Instead, the retinal cups let them see large, moving objects, like the potato fish that eat them.


Inspired by the fish, as well as the compound eyes of lobsters, which are known for their high light sensitivity, Jiang and his team built an array of tiny parabolic mirrors and placed them on the surface of a hemispherical dome. Based on the principle of superposition, the “cells” capture light coming in from a variety of angles and then concentrate them to a single point. The result was a fourfold increase in sensitivity. “That makes the difference between a totally dark image you can’t see and an actually meaningful image,” Jiang said in a news release. The lens can be used with any type of imaging system. 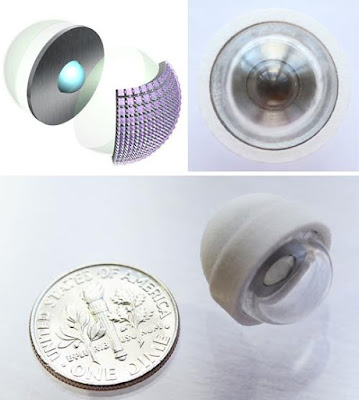 To overcome the naturally low-detail images the optical system provides, the researchers went back to man made technology: a super-resolution-processing algorithm to produce crisp, clear pictures.  Still, production is challenging because the optical features need to be very precisely aligned as they're fabricated.  Everything needs to be just right.  "Even the slightest misalignment can throw off the entire system," said Jiang.

Regular readers will know I rarely get into philosophy, but I can't resist pointing out that this will be interpreted completely differently by groups with a background in evolutionary theory or who espouse intelligent design.  Each side will say how it adds evidence to their view.  For evolutionists, they'll point out the obvious survival advantage the remarkable eye gives the fish and how it enables the fish to live where it does.  Consider how the "blind watchmaker" of natural selection could produce a system like this, a system if not unique in the world then one only observed once.  No other animal has a similar system so what did it evolve from?  How many versions didn't work and led to the extinction of different species?  How many millions or billions of different iterations had to be gone through to come up with this system - one which no human had figured out yet.  Is the universe old enough, or has life existed long enough on Earth to go through enough variations?  Intelligent design advocates will say "pretty darned intelligent design, huh"?  No human figured this out.