Solar Cycle Update - We Seem to Have Begun Cycle 25

Long time readers will recall that I used to do a “Solar Update” roughly every six months, but it seems my last regular update was in April of '18.  I kind of got out of the habit when the news every month was roughly the same: we're in an extended minimum.  I did a post on keeping an eye on the solar minimum last December when we were about to set a record for the longest stretch of days without a sunspot - and did a couple of days after that post.

In the last few months, there has been talk among the ham radio propagation watchers that the majority of sunspots since then - around Christmas of '19 - have been new solar cycle spots and that the week around Christmas to New Year's of '20 might end up marking the start of cycle 25.  (New cycle spots are instantly recognizable because they're closer to poles than the solar equator and they have reversed magnetic polarity from those closer to the equator.)

Today we find an article posted on Watts Up With That saying Cycle 25 has just started.  In saying so, the rely on an arcane measurement called the heliospheric current sheet tilt angle, and show that the angle has flattened recently, and they mark the similar points in the previous cycles. 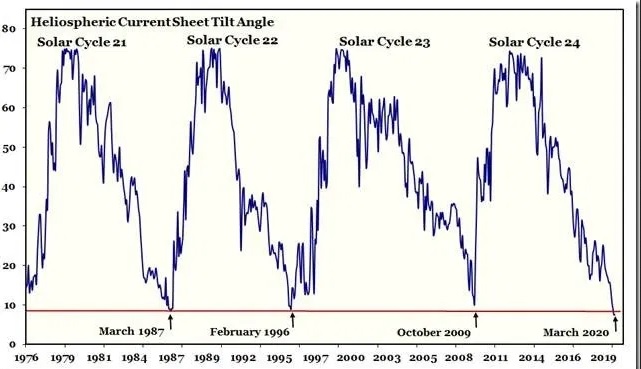 They state that much like “it ain't over until the fat lady sings” ...


The solar cycle isn’t over until the heliospheric current sheet has flattened. The data is provided by the Wilcox Solar Observatory at Stanford University. There were no observations from about 19 December to 5 February; so the values in between have been interpolated from the rotations before and after.

By two measurements; the number of rotations of the sun, (a Carrington rotation or solar day is 27.23 earth days) and by measurements of the 10.7 cm solar flux, they conclude the length of cycle 24 was 11.1 years, which is the average solar cycle length.  Cycle 23 was an outlier with a very extended minimum but this one was average.

I find it interesting that the planetary A index, a measurement of geomagnetic activity, for cycle 24 continues the trend of being lower than the 20th century “modern warm period.”  This plot shows that from 1932 until 2009 this geomagnetic index never went below values that were on the high side for cycle 24.  I think anyone older than about four could look at this plot and play “one of these things is not like the others.” 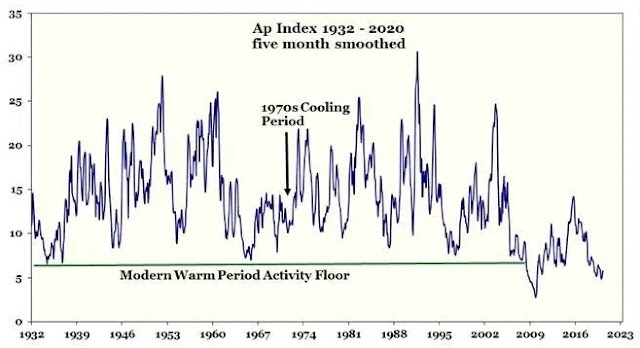 A coincidence in timing to be sure, but the ARRL reports that NOAA released their predictions for Cycle 25 and stick with their previous predictions of another cycle like the last one.


“While this is SWPC’s official Cycle 25 prediction, it’s important to note there is still divergence among various forecasting methods and members of the space weather forecasting community,” Donovan said. “Most forecasts and forecasters agree that the Cycle 25 is likely to be within ±20% of Cycle 24 and is likely to occur between 2024 and 2027.”

To the best of my knowledge, Dr. Valentina Zharkova is still predicting that Cycle 25 will be weaker than the last and that there may be an extended minimum lasting until potentially as late as 2053.  Ish.