Is A New Grand Solar Minimum Upon Us?

That's the prediction Dr. Valentina Zharkova advances in a presentation of her "Climate and the Solar Magnetic Field Hypothesis" presentation at the Global Warming Policy Foundation in October, 2018.

Dr. Zharkova's work has appeared here before, with the first time in 2015 predicting a decline in solar activity to Maunder minimum levels last seen in the Little Ice Age.


Their predictions using the model suggest an interesting longer-term trend beyond the 11-year cycle. It shows that solar activity will fall by 60 percent during the 2030s, to conditions last seen during the Maunder Minimum of 1645-1715.

Some link somewhere led me to a summary of Dr. Zharkova's talk over at Signs of the Times (SOTT) which says:


The information she unveiled should shake/wake you up.

Zharkova was one of the few that correctly predicted solar cycle 24 would be weaker than cycle 23 - only 2 out of 150 models predicted this.

Her models have run at a 93% accuracy and her findings suggest a Super Grand Solar Minimum is on the cards beginning 2020 and running for 350-400 years.

There are two videos of her presentation; the short "highlight" video is 20 minutes long and the long one is an over an hour and a half (93 minutes - the last 33 are a rambling Q&A that's not worth much).  Watch the long one; the 20 minute video is very low content density - almost content free.  Having watched her talk, I think the last sentence in that quote from SOTT misinterprets something she said.  She didn't say the next minimum would be starting in 2020 and running 350-400 years, she said there's a cycle of grand minima that occur on roughly 350-400 year intervals (time mark 53:40 in the video shows it).  The solar minimum that we appear to be going into is expected to last from "2020 to 2053".

Dr. Zharkova's work is on the solar dynamo, the magnetic fields that create virtually everything we see on the sun.  It began by observing the sun and attempting to come up with a model to explain the patterns we see.  Reviewing this work and trying to see the differences between this and some of her publications which I've talked about in the past, it's very similar to the research published in Nature.  That 2015 prediction was based on two Principal Components measured over perhaps three cycles (~33 years).

In the current work, she includes more terms of the Principle Components, four terms instead of two.  Adding more terms should produce a better model fit.  (A familiar example might be using more terms in a construction of a square wave by adding Fourier series components.  If you use two sine wave harmonics, it doesn't look square at all, but as more terms are added, the wave you're constructing gets more square.) 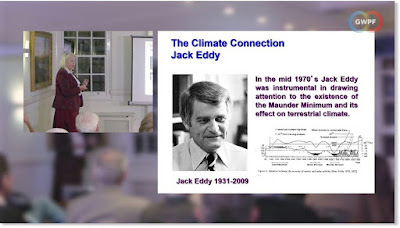 While we've all heard on stock market service commercials the disclaimer that, "past results do not guarantee future performance", I'm inclined to weight Dr. Zharkova's team's predictions favorably based on her predictions about this cycle.  The strong part of her predictions is this track record.  The weak part is that while it's a smart, modern technique from Digital Signal Processing, it still depends on observations from a short period of time.  While it matches these observations well,  I still don't know how well it can be extrapolated over thousands of years.  She makes comparisons to ancient sunspot observations, and the predictions and observations are in agreement, but the data to compare predictions to is very sparse.  One observation every couple of solar cycles isn't much of a test.

My usual way of looking at predictions like this has always been that I'm wary of predictions for another Maunder minimum on general principles.  It was both severe and at the dawn of solar observation.  We simply don't have detailed data of anything before the Maunder that we can compare current conditions to.

Dr. Zharkova does predict that weather is likely to become colder due to the solar minimum, and then adds in the motion of the sun in the solar system, the Milankovich cycles. She says emphatically and repeatedly that she's not a climate scientist, she's a solar physicist, which sounds to me like, "I'm not a climate scientist; I'm a real scientist".  That's worth a few points, itself.