Better worded as "time to start paying attention to the attention whores".  At least keep an eye on them.

Hat tip to Miguel at Gun Free Zone for an article on, and link to the text of, the first of what will certainly be many attempts at gun control bills, HR1175 introduced by New Joisey Democrat Frank Pallone.  My gut feeling is that this might pass the house on a straight party line vote and then will be shuffled under a desk in the senate and never see the light of day - if the Senate has any sense and the President doesn't try to push it like he did banning bump stocks.  However, as someone said, "never underestimate the ability of Republicans in groups to do stupid things".

The first section is titled:  “Do-it-yourself assault weapon ban,” and it takes the approach of declaring gun parts as banned hazardous products under section 8 of the Consumer Product Safety Act (15 U.S.C. 2057). They include any "firearm receiver casting or firearm receiver blank or unfinished handgun frame", which they specify is not actually a gun, but that "after purchase by a consumer, can be completed by the consumer to the point at which such casting or blank functions as a firearm frame or receiver for a semiautomatic assault weapon or machinegun or the frame of a handgun."  Note this wipes out not only the entire 80% AR lower market, and the newborn 80% handgun market, but it also wipes out the much smaller market for "0% lowers".


Then they go into destroying the sales of parts for guns by adding that "An assault weapon parts kit. or  a machinegun parts kit," are hazardous products and are to be banned as well, when they add the definition:

the term “assault weapon parts kit” means any part or combination of parts designed and intended to enable a consumer who possesses all such necessary parts to assemble a semiautomatic assault weapon;

Any part means any part, from a replacement sight to replacement stock or barrel, or anything they so deem.  This would make it illegal to sell replacement triggers, or replacements for each and every spring, pin and metal piece in a fire control group.  Anything.

The issue with regulating buying parts is that it also makes it impossible to repair your guns, which will make them the only piece of private property you own that you're not allowed to repair.  If every single component has to be serialized and tracked from "cradle to grave", parts get more expensive, probably get harder to find and the industry is probably decimated.   Of course to the guys behind this bill, everything we consider negative is part of their goals.

Oh, when they use the term "semiautomatic assault weapons", they are also specifically talking about pistols and shotguns.  This isn't about ARs and AR pistols, this about anything other than revolvers - or anything beyond single shot black powder.  Anything semiautomatic is lumped into this bill.

There's a lot of space in the bill dedicated to everything getting serialized, and creating agencies of the Federal government that will administer serializing.  As Miguel points out, serial numbers never solve crimes, but they provide traceability and make it easier for the government to know who owns what and that is all they care about come Confiscation day.

This seems largely put together from other old failed laws, unless they've been feverishly working on the bill for the last couple of weeks - but it doesn't look like it was "worked on".  According to the header, it was introduced on November 2nd.  Judging by news reports, it seems the lame duck session has just started, and they're already involved in identity politics wars over Comrade Peloski's bid to be Speaker again.  Seriously, do you guys have any arguments that aren't identity politics or assigning free will and intent to inanimate objects? 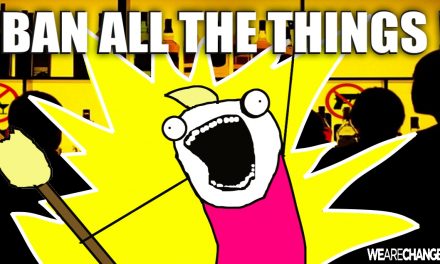