I used to have a Facebook account.  Closed it several years ago because I could see that it wasn't doing anything for me.  It wasn't worth the price, and no, it's not Free.  The only things FB ever did for me was allow me to swap emails with one or two guys I haven't heard from since high school - and haven't heard from since.  In trade, FB takes everything you do or say and sells it to companies that try to monetize it.

I've never had accounts on Twitter, Instagram, or any of the startups like Gab.  The only two social media presences I have are this blog with the list of blog friends I read, and I have an account on Pinterest.  There's virtually no person-to-person interaction on Pinterest and I'm not sure why it's considered social media.  The only thing that makes it social is that other people can see what you "pin" (save to a dedicated area of yours).  What tends to happen is that if someone likes what you pinned, they copy it from your area to theirs.  That's all.  If they don't like it, chances are they don't even see it.  I've never had a conversation on Pinterest with another user in the couple of years I've been there.

Google's monopoly is the only social media I stay within the confines of, and I'm always on the verge; always just one more, "that's it", from leaving.  Google links Gmail, YouTube and their other services into a social network of a sort.

Where am I going?  Why am I writing about this?

It's becoming widely known that social media was designed to get us addicted to it, and that the executives from high tech companies are so concerned about the behavioral changes that it can cause that they're strictly limiting their children's screen time.  From the first link, Computerworld:


If you're a social media addict, and your addiction is getting worse, there's a reason for that: Most of the major social network companies, as well as social content creators, are working hard every day to make their networks so addictive that you can't resist them.

And from the second, Business Insider:

Apple CEO Tim Cook, for example, has said that he doesn't allow his nephew to join online social networks. And the late Apple CEO Steve Jobs said in 2011 that he didn't let his kids use the iPad.

Business Insider links to other stories that underline how the generation of the engineers and programmers raising their kids in Silicon Valley now are strictly limiting screen time.  They see how much time and effort goes into making digital technology irresistible.  I think it's worth noting that the people who get the closest view of how the things work are becoming the first group limiting their kids' exposures to them.

Lately, you can't go a day without reading about a Twitter rant or fight, shadow banning of any opinions other than far left, and other bad things linked to social media.  Would Twitter fights happen in real life; or would they have happened in a real life that hadn't been conditioned by social media responses?   Would incidents like this young twit throwing coffee or whatever on the FSU college Republicans happen in a world that hadn't been conditioned by the instant pleasure/instant rage responses of social media?

From what I see, social media brings out the worst in humanity, by making the services as addictive as crack cocaine.   I say to work on becoming free of that addiction.  There are online programs to help you get over Facebook addiction, 99DaysOfFreedom - which strikes me as an ironic statement. 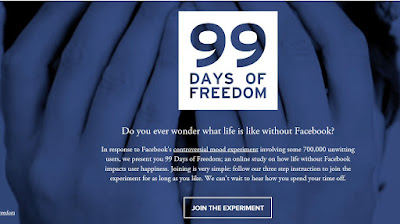