The contrast is giving me whiplash.  Nausea.

This afternoon, I watched the live feed of the Insight probe landing on Mars.  It was classic JPL - on one of their great days.  Every milestone clicking off on schedule, everything going right.  Every minor milestone caused the controllers at their terminals to applaud for a few seconds.  Finally the call that landing was verified, and there was quite a bit more celebration. 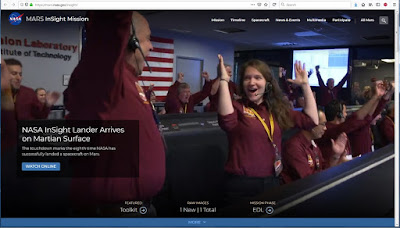 That was followed a few minutes later by the first photo from the lander. When the live video coverage shut down, everything had happened on schedule and it looked great.  NASA has successfully soft-landed a vehicle on the Red Planet eight times.  It has always been difficult, but JPL makes it look like they know what they're doing - because they do.  Even though they've done it more than any other group, JPL has lost craft on the way to Mars and a landing.

The contrast, though, comes from a set of articles linked by the Blaze this morning.  It seems the New Woke NASA scientists think ‘exploration’ is ‘problematic’ and oppose Mars missions like this one:


Adler astronomer Lucianne Walkowicz is the Baruch S. Blumberg NASA/Library of Congress Chair in Astrobiology, not to mention a guest star (as herself) on National Geographic’s Mars TV series. Cosmologist Dr. Chanda Prescod-Weinstein is with Department of Physics at the University of Washington, and fellow at NASA’s Goddard Space Flight Center. And together they are, counter-intuitively, not so keen on the exploration or colonization of Mars.

In fact, the very word “exploration” is inherently “problematic”, they would have us believe, as detailed in a panel discussion published at Gizmodo last week. It was highlighted Sunday by Powerline, with the observation that “if these folks had been with NASA in the 1960s, we’d have never made it to the moon.” That may seem like a snarky insult on the part of Powerline, but in fact it’s precisely the point that the scientists made.

It seems that they feel we have no right to explore Mars, and any such thoughts should focus on social justice for Martian inhabitants.  Inhabitants?  What inhabitants?  Personally, I think that missions from the first Viking landers in 1976 through the most recent missions show that Mars is a sterile planet; or perhaps we could say the probability that microbes exist on the planet is vanishingly small (1 in 10^-10 to PFA a number). 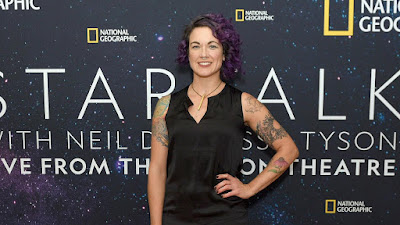 The two were also featured in Gizmodo in a piece called "Decolonizing Mars" (is the publicity the two are getting what it's all about?)   I find the phrase puzzling: there are no colonies on Mars to "decolonize".  There are several probes, thoroughly sterilized before launch, on the surface, but no colonies to "decolonize" and bring the settlers home from.  Still the rhetoric we get from these two talks about indigenous peoples rights and other things that just don't seem to fit the situation at all.


Walkowicz: In my work, I’ve been thinking about issues around how we talk about going to Mars, and plans that people make for what they want to do when they get there—whether it’s living on Mars, doing scientific research and trying to figure out its history, or corporate interest in mining or resource extraction of any kind.

There are a variety of scientific reasons why human presence might make certain investigations easier on Mars. But I’m disturbed by the way people talk about going to Mars as if the planet is ours... When we talk about terraforming, that’s a planetary-scale strip mining operation. If you transform a planetary environment, even if you think you know how to do it, that represents a total alteration of the chemistry and physics of the planet, which means you may erase the history of life that might be there.
...
I can’t give you an example of what a decolonized Mars looks like, but it starts by having multidisciplinary conversations about the things that happen here on Earth. I often give examples of Standing Rock as an Earth-based example of interests colliding, where you have indigenous people opposing a large-scale project that, much like space exploration, features cooperation between private industry and the government...

Prescod-Weinstein: I’m trying to think carefully about what our relationship to Mars should be, and whether we can avoid reproducing deeply entrenched colonial behaviors as we seek to better understand our Solar System. This includes thinking about why our language for developing understandings of environments that are new to us tends to still be colonial: “colonizing Mars” and “exploring” and “developing,” for example. These are deeply fraught terms that have traditionally referred to problematic behaviors by imperialists with those that we would call “indigenous” and “people of color” often on the receiving end of violent activities.

When I first read that piece in the Blaze this morning, my reaction was to say we need to just shut down NASA entirely.  If that's what became of the agency that was so good in the 1960s, they've outlived their usefulness.  Shut them down and sell the assets to the highest bidders.  DOD or private industry.  Other countries - if there's no security risk.  Then I watched the landing and it brought back memories of the good old days.  They do know what they're doing!  They're not all about Muslim outreach!  Now I don't know what to do.  Does NASA stay or get zeroed out?
.
.
.

Wait!  I found an image of an indigenous Martian on a rare trip to Earth!  This must be what the woke NASA scientists were thinking of!  I have to reexamine all my thoughts about this. 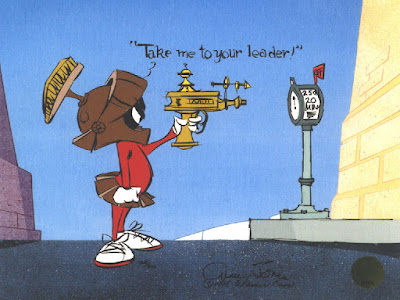