By the time I shut down the computers for the night last night, Andrew Gillum had conceded the Florida Governor's race to Ron DeSantis.  Governor DeSantis had a thin margin of victory, on the order of 45,000 votes, but it was expected to be a tight election.

In the senate race, celebrations from this morning are looking premature this evening.  I recall seeing a statement that Bill Nelson had conceded the senate election to Rick Scott overnight, but most reports this evening say he refused to concede.  The Internet doesn't forget (although it can certainly hide things), but the story is at the Orlando Sentinel.

By tonight, the margin is 0.32%, 26,056 votes in Scott's favor.  State law triggers a recount when the difference is less than 0.5%, and Nelson has requested one, which indicates he has not conceded.  Welcome to Hanging Chad 2.0.  They say we'll know by noon Saturday.

Most of the races went as I voted, although some of the amendments did not.  I'll explain two in particular that passed and I voted against.  First is No. 9, which both bans offshore oil and gas drilling and Vaping in enclosed workplaces.  First, I don't see the sense in lumping these together - they have nothing in common.  Second, I think banning vaping should be left up to the businesses running those workplaces and the state shouldn't be involved.  Third and most importantly, I'm in favor of offshore oil and gas drilling.  Heck, I'm in favor of leasing part of my backyard for fracking.

The other amendment that passed which I opposed bans dog racing.  Sorry, I love dogs (nowadays, just other peoples' dogs) but I don't see anything wrong with it.  Yeah, I've been to dog racing, but not since I turned 18 or whatever it was that made it legal for dad to take me.  Lets say I haven't been to a dog track in 45 years.  Another area I don't see the government needing to be involved in.

The bigger picture I believe I see in the country is one I think I first wrote about back in 2011, that divide we all talk about, the one we call "red state vs. blue state" is really big cities vs. more rural areas.  It can be seen in a map of how Florida voted in the 2012 and 2016 presidential races, from a paper called Your Observer. 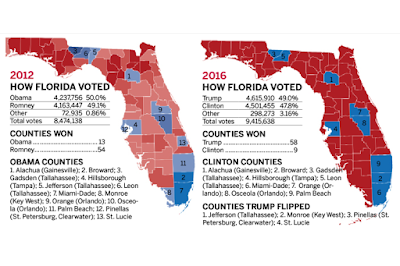 There are minor differences between them in the counties - a couple of blue counties went red in 2016 - but the big cities are in the three counties on the southeast coast (Palm Beach, Broward and Dade in north to south order), Tampa in the county numbered "4" on the west coast, and then Orlando and its suburbs in the area marked 7 and 8 in 2016.  The area numbered 1, which I believe represents the highest percent votes for the Democrat is Alachua county, home of the University of Florida.  The counties numbered 3 and 5 are close to the state capital of Tallahassee and home to Florida State University.  No wonder they vote for big government.  (There are big state universities in Tampa and Orlando as well, and big private universities in SE Florida).

This isn't a new phenomenon and I'm certainly not the first to comment on it, but I think it's getting worse.  A new complication comes from the Democratic Socialists of America (no link; you have a search engine if you care).  It's one thing that Occasional Cortex talks openly about getting rid of the electoral college (I've done a couple of posts about that movement this year); just as dumb, the DSA and some of its minions are talking about getting rid of the Senate.  The main argument is that the senate isn't fair because each state gets the same number of senators (I'm not making this up).  To paraphrase Senator Diane Feinstein (D - Uranus) "why should Wyoming’s 500,000 residents have equal have status with California’s 36 million?"  There is no mention that other side of the capitol building houses a body where representatives are proportioned by population.  It's a rather elegant way to try ensure big cities don't rule everything in the country.  But having a few big cities control all those icky deplorables is what the Democratic party wants.

But, hey!  The CATO Institute ranks Florida as the #1 Most Free state in the country.  Details here. 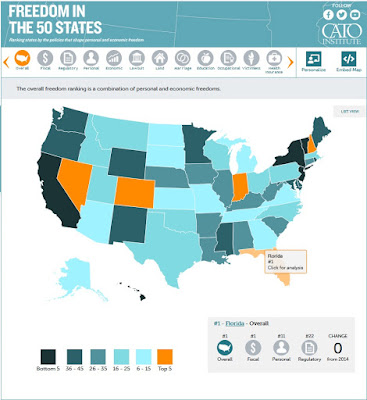 EDIT 2255 EST 11/07:  Thanks to commenter Aesop for pointing out I barfed the first name of Diane Feinstein calling her "Babs".  Short Attention Span.