Some Problems With That New Climate Change Report

Last Friday, as in Black Friday, the Fed.gov released the latest version - 1700 pages - of the National Climate Assessment (NCA). Typical of media reaction is The Atlantic, wondering "why would they release this on Black Friday?  To keep people from reading it?" and then going on to highlight that the report "contradicts nearly every position taken on the issue by President Donald Trump."  Funny how they never criticized Obama for all his Friday and holiday weekend document dumps.

The fact of the matter is that the report is required by law, was scheduled for "late in the year" all along, and is a product of government agencies and employees that have nothing to do with President Trump.  It's not like the report was put together by a team President Trump picked by hand.  If anything it's the opposite: it's a report put together by a team Barack Obama picked.

Which means it's based on all the bad data we see all the time: temperature series that have been adjusted to make the past look colder and the present hotter (long term temperature records from around the world always disagree with the adjusted version the Feds use); wild exaggerations about the effects on hurricanes, fires and every aspect of our lives.

Nicolas Loras at the Daily Signal reports on four points you might find useful should you need to point out the errors of the "the world is going to end before I grow up" crowd at a holiday get together. 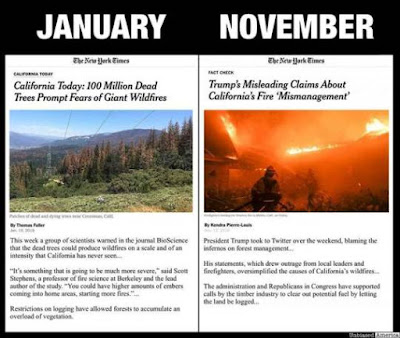 Two articles in the New York Mullet Wrapper Times: Last January, it was OK to say the forest management practices that left 100 million dead trees on the ground could cause a horrifying wildfire season.  In November, after the worst of those wildfires it suddenly was no longer acceptable to say forest management might be a problem, but it was thought critically important to quibble over the wording of the president's tweets.

In the land of uncomfortable truths is this fact: virtually no country on Earth is meeting its Paris Accord obligations.  Here's another one:  the US is now the global leader at reducing its emissions even though we didn't sign the accords.   Possibly the most uncomfortable truth of all:  if all of the dire assumptions and models in the Climate Change camp are applied, the Paris accords result in a net temperature change of 0.05C by 2100.  The current NOAA procedure rounds the high and low temperature to the nearest whole degree Fahrenheit (0.55°C, a value eleven times greater than the .05°C savings Paris offers).  That means the effect of Paris would be undetectable.  There are no words for how preposterous I find this. 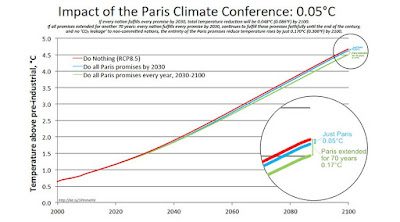 From The One Graph Every Discussion About the Paris Climate Treaty Needs to Include: here.