I See Market Distortions and Dysfunctions

Almost everywhere I look, I see non functional markets: education, health care; the financial sides of almost everything.  The cause is always the same: big government.  In particular, the financial distortions that come from our constantly inflating monetary supply and the policies around it.

This was initially prompted by the coincidental combination of an article on Bayou Renaissance Man "Putting health-care costs under the microscope" and one from FEE (the Foundation for Economic Education), "The Idea That the US Has a "Free Market" Health Care System Is Pure Fantasy".

In the latest campaign season, I don't think we went two days without hearing someone advocating "Medicare for All", or "Single payer healthcare".  In a stunning departure from normal political discourse, CEO of the Democratic National Committee Seema Nanda was surprisingly honest.  Nanda admitted she had no idea how to pay for it.


Nanda was asked at a Yahoo Finance summit how Democrats plan to pay for the “very expensive … $3 trillion a year” Medicare-for-all plan that Democratic candidates ran on in the 2018 midterm elections.
....
“Your answer is I don’t know how we’re going to get there but these are all big conversations we need to be engaged in,” Nanda said.

The impression we get is that we're in a wolves' den of terrible free market forces where providers charge whatever they want and kill off their patients (the two don't seem to go together).  The problem is we aren't in a free market for medical care, with very few exceptions.  We have a bastardized system where the people who pay for the product aren't the ones most affected by it.   Healthcare is paid for by brokers (insurance companies) who skim off a percentage for themselves.  People paying for that insurance pay not just for coverages they want and need, but they pay for many others because lobbyists get congress to mandate all insurance plans cover their favorite expenses; everything from sex change treatments to addiction treatments to other psychological treatments.  Devoted teetotalers are required to pay for addiction treatment coverage.  Families beyond the child bearing years or with no desire or interest in having children pay for maternity coverage.

Medical costs are scary.  One of the reasons they're so scary are the market distortions we see throughout the medical world.  Almost regardless of what you can save in your life (assuming you're not in the billionaire class), you can be wiped out at the end of your life by the costs of treating your final problems.  This makes people sensitive to the idea of a "safety net" and this is where the interest in things like Medicare for All comes from.


But let's face it.  A great many voters, whether Republican or Democrat, want to hear the magic words "safety net" when it comes to health care. This is why even voters in Idaho, voted to—as they saw it — expand the health care safety net.

As far as public spending as portion of total healthcare spending, the US is pretty low on the list, however the per capita US government healthcare spending is fourth highest in the world, behind only Norway, Luxembourg and the Netherlands. With the government having a practically infinite checkbook (they just create more debt out of thin air), it essentially doesn't matter how much it costs, because the supply of money rises to meet the demand. 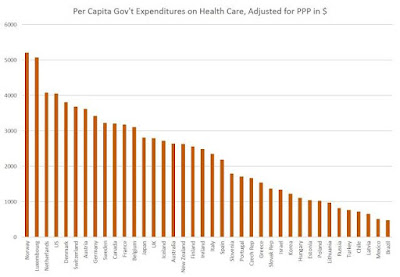 If you want to see a graphical representation of "things that can't go on won't go on", look at this plot of the growth of Fed.gov healthcare spending vs. GDP growth.  Healthcare spending is going up about 4x the GDP.  Where can the money to pay for even continuing the current expense rates come from?  Aside from that, how can anyone argue the practically infinite checkbook of the Fed.gov doesn't add price pressure upwards? 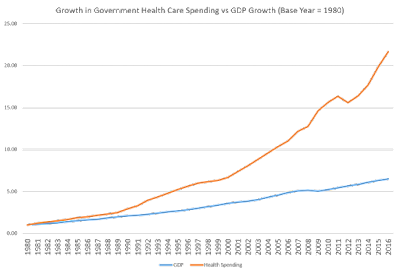 The point of the article (from Mises Institute and excerpted at FEE) is that the idea that claims we have some sort of free market health care nightmare are false.  We haven't had a market in health care in a really long time, if ever.  With insurance structured as it is, patient and provider never negotiate or agree on prices.  With very few exceptions, providers don't post prices, so you can't shop around for the best value in a doctor, hospital, or whatever.  In general, if you tried to find out what a procedure would cost at a hospital, you'd never find someone who could tell you the cost because nobody knows.  Most patients don't care what it costs as long as the insurance pays for it. They never seem to equate the cost of their insurance premiums with part of the cost of the medical procedures.

I have to believe free market reforms would help immensely, mainly because there's a handful of places where free market principles are already working.  In his usual, bombastic style, Denninger talks about some of this at Market Ticker.


When it comes to surgeries (Hospital Part "A" stuff) may I point to The Surgery Center of Oklahoma which routinely, even when it has to buy supplies and drugs at monopolist prices which are 100-500% or more of a market price, manages to undercut the local hospital in your town by that very same 80% I cited as necessary?  Were they able to buy supplies and drugs at market prices it would likely be 90%.  Oh, and you're one twentieth as likely to acquire an infection in said surgery center as your local hospital because they can't bill you for the cost of fixing their own mistakes and as a result they're far more-careful than your local hospital is.