Arriving at Mars Monday the 26th

The US' Insight Martian lander is set to land on the red planet this coming Monday at around 12 noon Pacific time (3PM Eastern).  The mission was planned so that with a launch on any day of a window stretching from last May 5 through June 8, the landing would be on Monday the 26th.  That means that every path would be slightly different, but in broad strokes, the mission would launch while Earth is closing on Mars in our inner orbit and then pass Mars by the time the probe lands. 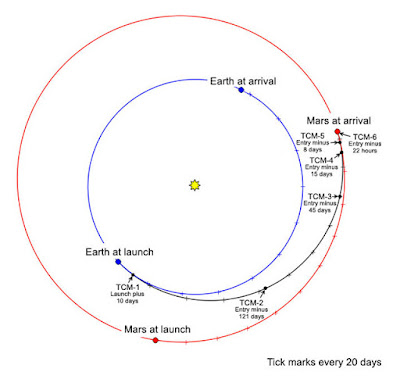 The probe itself is the first mission of its kind.  While previous probes were primarily aimed at determining the presence or possibility of life, this one has a totally different sort of mission: to investigate the geology of Mars.


The mission of NASA’s newest space probe lives up to its acronym of a name, Insight: Interior Exploration using Seismic Investigations, Geodesy, and Heat. Overall, its goals are to 1) understand the formation and evolution of terrestrial planets by investigating the interior structures and processes of Mars; and 2) determine the current levels of tectonic and meteorite impact activity on Mars.

To get to these goals, Insight will determine or measure:


The lander is equipped with appropriate probes for this work, which (of course) are things that have never been flown before: a seismometer  and a probe that's deployed 10 feet into the soil to sense heat flow and other physical properties.  Heat sensors on the probe can measure temperature differences as small as 0.02°F. A spring-loaded tungsten block will hammer the probe down into the ground, taking an estimated 5,000 to 20,000 strokes at one stroke every 3.6 sec (5 to 20 hours worth of hammering).  Data from the probe will give astronomers a way to assess the planet’s interior energy and its dissipation. 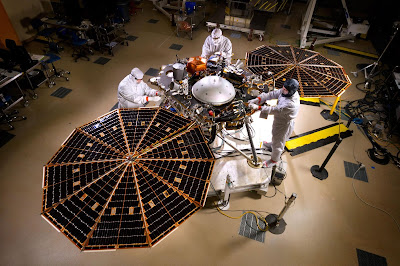 (The Insight spacecraft was built at Lockheed Martin Space's facility in Denver, Colorado)

The surface of the probe is studded with other sensors as well.  More details a both Machine Design and the Mission home page.

A very novel aspect of this mission is that there are actually three probes on the way to Mars: insight and two smaller Mars Cube Ones (MarCO) spacecraft, each measuring 14.4 × 9.5 × 4.6 in.  The satellites are now a few thousand miles or so behind Insight on their own trajectories under their own propulsion and steering.  They each carry high-gain antennas and a compact radio, enabling them to communicate with Earth from up to 93 million miles away. The Cube Ones will be relaying data from Insight to Earth during probe’s the descent and landing phases. They also have cameras and have taken and sent images back to Earth during the flight.

NASA will provide coverage of the Insight landing, streamed live on YouTube here.