Something I've Been Predicting For Years Seems to be Happening

Far enough back that I don't clearly remember when this dawned on me, I came to the conclusion that full time employment is going to go away.  There will always be some, but companies will reduce the amount of employees they hire and instead rely more free lance contractors.  The reason: too may regulations bring too much cost to comply with those reg.s.  Every time congress passes a new law to "protect workers", the costs on companies go up, impacting more workers.  A simple example is from back when Obamacare was mandated: my insurance premiums went up (doubled?) but my deductibles skyrocketed.  The company could have provided the same plan, but it would become a "luxury Cadillac plan" and they would have had to pay the "Cadillac tax" for providing better insurance.  That means they're paying twice: once to the insurance companies for the better coverage, and then paying the Fed.gov for the privilege of buying a more expensive plan.

Today, Human Resources costs have gone up so much that small companies are outsourcing their HR tasks to service contractors.  If you're a small company, perhaps around the 50-employee mark, the amount of time required to ensure compliance with the many laws interferes with the other things managers need to do.  As a result, they hire HR service companies to ensure they're meeting all the regulations.

In the case of big engineering/manufacturing companies like the one I'm retired from, they will probably only keep the people who are their technology leaders as full time employees.  There will be fewer new graduate engineers hired: big companies were typically where new grads went for their first job because they're too expensive for a small company to make productive. Perhaps those companies will soon be a few percent long-term employees, maybe twice that percentage in promising young engineers, but the majority of the "heavy lifting"; the jobs that require experience and the engineering judgement that experience brings, will go to contract engineers.

What brings this to mind is that over the last few months I keep seeing articles like this, with the theme that by as soon as 2020, which is about 15 months from now, the number of Americans who will be contract employees or self-employed in other ways will reach as much as 50% of the workforce.  The exact number or percentage varies with the source, but there's wide agreement on the general trend.


“Americans are increasingly disillusioned with the notion that a successful career means climbing the corporate ladder,” FreshBooks CEO Mike McDerment told Quartz. “Whether or not the shift to self-employment occurs at the velocity our study indicates or not, the real significance is the mindset shift of the American workforce.”

You may have heard this referred to as "the Gig Economy"; you don't have a full time position anywhere, but you have a handful of part time jobs that you do as needed.


According to a recent study by the McKinsey Global Institute, up to 162 million people in the United States and Europe are involved in some form of independent work. That said, as scary as change is, we need to embrace the gig economy as central to the future of American work. This shift has already begun to turn the age-old advertising industry on its head. The explosion of smartphones has turned everyday consumers into content creators, giving brands seemingly unlimited options outside of the traditional creative agencies and making content available with greater speed and lower costs than anything ever seen.

What does the Gig Economy look like?  For people who would fill minimum wage jobs, perhaps they have gigs with Uber or Lyft.  Perhaps people will make income from AirBnB or something similar.  It seems that with online shopping growing as it is, delivery services and couriers will be a growth industry.  The US Bureau of Labor Statistics put together an overview with some ideas of the kind of jobs being talked about.  I can envision work being easiest to find for people with trade skills such as appliance or air conditioning repair.  They can can probably sign on to work on installations for the big home improvement centers for as many hours as they'd like.  Not to mention the apps like Takl that are setup to for this sort of worker.

This is not written in hopes of showing everyone what a beautiful future we're heading for.  It will be hard, especially for the less-skilled workers.  On the other hand, that has always been the case.  This seems to be a pretty reasonable assessment of the concept of the Gig Economy. 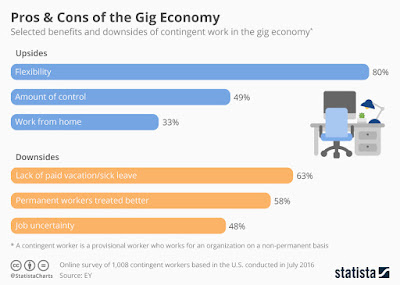 (From statista - as it says)