Science Story of the Year So Far

I was reading other people's blogs today, and both Bayou Renaissance Man and Borepatch had stories that made me want to do a serious blog post about important things.

And then I got an email today about a scientific fact and exploration of how it works that are without a doubt the biggest science story of the year.

Wombats poop little cubes, about 3/4" on a side.  I did not know that.  You Aussies can laugh at me now, but I've never seen a wombat in person before, and certainly never seen their poop.  The story is about a group that researched and discovered exactly how cubical poop is formed.  As the friend who sent me the email said, "when you read this, you'll shit a brick".  Well, the wombats will. 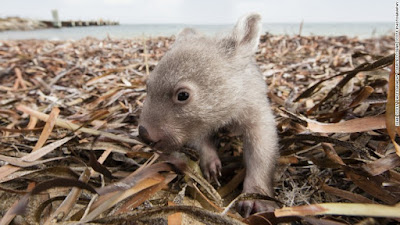 Derek the wombat at 8 months old.  Derek was rescued from his mother's pouch after she was hit by a car in December 2015.  It doesn't say if Derek is still alive, or what the life expectancy of a wombat is.


The wombat, native to Australia, produces about 80 to 100 cubes of poop each night. It is known to deposit piles of dung outside burrows and on top of rocks and logs, most likely to communicate with other wombats, researchers believe.

It is thought that the cubed shape of the poop means it is less likely that it will roll away, and is prominent for other individuals to notice and smell, Carver added.

Less likely to roll away?  Do wombats only poop on steep inclines or hills?  I suppose it's a plausible explanation, but exactly how they could extrude cubical poop when every other species ever observed extrudes more or less cylindrical poop was never understood.  Then the article runs what I think is my favorite sentence of the last year, or more:


Researchers, led by the Georgia Institute of Technology's Patricia Yang, said they have uncovered the digestive processes behind the mystery and presented their findings at the 71st Annual Meeting of the American Physical Society's Division of Fluid Dynamics in Atlanta on Sunday.

The American Physical Society is about as prestigious an academic society as there is.  I bet nobody there had another APS paper on poop formation, though.


To solve the puzzle, the team examined the digestive tracts of wombats that had to be euthanized following vehicle collisions in Tasmania, Australia.

The wombat takes about two weeks to digest its food and researchers found that as faeces move into the final 8% of the intestine, it changes from a liquid-like state into solid matter. At that stage the dung takes on the shape of separated cubes measuring about two centimeters in length.

"The weird thing is that if you open up a wombat you actually find that the cubes become formed in the lower part of the intestine, before they exit the body," Carver said.

By inflating the intestine with a long balloon, the researchers found that the wombats' intestine walls stretch unevenly, allowing for the formation of the cube shapes.

There ya go, if you'll pardon the expression.  The wombats' intestinal walls are stretchier in some place and stiffer and others; exactly what you'd need if you were trying to design a system to extrude cubes.

As I understand natural selection and evolutionary theory, a trait survives to become dominant in a species if it offers survival advantage - or comes along with other genes that do offer survival advantage.  That means the cubical poop must be important to the wombat - not in the sense of wildlife bar bets like saying "I bet you can't poop a cube like I can"; it has to increase the chance of surviving and mating.  Perhaps, at some point, some proto-wombat ancestor dude got to mate more because the proto-wombat ancestor babes were impressed with their cubical poop.  "I was going to pair up with Jeffy, but Todd poops these beautiful little cubes!"  Maybe cubical poop was thought to be so cute that the wombats who could produce it got all the girls and the ability spread through the wombat population like wildfire.  Or you could say God has a sense of humor.