Acting as if there isn't a staff responsible for the White House, and Melania personally chooses every aspect of every decoration, the media criticized her for the choice of red decorations this year.   Some twit on Twitter said it was reminiscent of the outfits from A Handmaid's Tale, which is apparently something they see everywhere this year.  (Project much?)  You might recall that they criticized her last year for her choice of white decorations.  No, there isn't a color theme she could have chosen that wouldn't draw criticism.


Mainstream media outlets such as The Washington Post, USA Today, Time, HuffPost, San Francisco Chronicle and Vice all mocked the decorations, often masking their disdain by focusing on the backlash of trolls on social media.

The Babylon Bee points out that she was criticized for decorating the White House with the skulls of their enemies.


While past first ladies have decorated the White House with traditional Christmas wreaths, trees, holly, and lights, Trump opted to mount the heads of her slain foes throughout the executive residence "as a warning."

"Did she go too far?" one pundit on CNN pondered. "I gotta say, these heads don't exactly say 'peace' and 'love' like a good, old-fashioned wreath would, you know?" 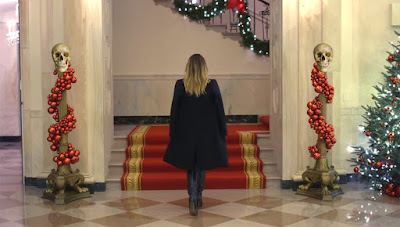 Pressed about whether skulls presented enough holiday cheer and festive spirit, the First Lady commented, "The skulls bring out the festive joy of the holiday season in our decor. We're reminded to treasure what we have when we see the skulls of our conquered foes every time we walk through these sacred halls."  She paused and added, "It's all to point us to the reason for the season."

And what's the reason for the season?


"To crush your enemies, to see them driven before you, and to hear the lamentations of their women," she stated.